The Royal Baby is Finally Here!

Have you heard? We have a new future King of England! The Duke and Duchess of Cambridge have just welcomed a son into the world!

The media has been abuzz about them since they announced their pregnancy months ago! And in the past few weeks, speculation on the gender and the name of the baby has skyrocketed. There were even bookies in England taking bets on what name would ultimately be chosen. (I wonder who scored big and who lost!)

I watched on a live news stream as the official correspondent left the hospital, entered the gates at Buckingham Palace and placed the official birth announcement on a golden easel.  The document said:

"Her Royal Highness The Duchess of Cambridge was safely delivered of a son at 4.24pm."

The baby is already being hailed as the Prince of Cambridge. He was born today, July 22nd in the  St. Mary's Hospital in Paddington, London. He weighed in at 8 lbs and 6 oz. A healthy start for new royalty! I'm sure all of England is rejoicing!

The Duke of Cambridge was present for the birth and the mother and child are doing well! She will remain in the hospital overnight but they should be announcing the baby's name very soon!

The Queen, The Duke of Edinburgh, The Prince of Wales, The Duchess of Cornwall, Prince Harry and other family members have indeed been informed and are delighted with the news. 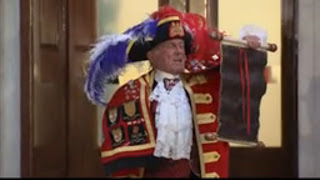 A royal announcement was made by an official in a red uniform with a scroll. He started by saying "Hear ye Hear ye" and revealed that it is indeed a son and ended with "Long live the Queen!" It was all very official and exciting. The media outside the palace cheered!

Later, the doctor left the building and shouted "It is a beautiful baby boy!" as he passed by.

I will update you again when the name is revealed!
Written by The Art of Naming at 2:06 PM