Name of the Week: Catalina

The Girl Name of the Week comes to us in honor of this week's "Spanish Names For Girls" list. I have to admit that I had a very hard time choosing just one name to feature since so many of them stood out to me. I finally decided on Catalina, pronounced kah-tah-LEE-nah. 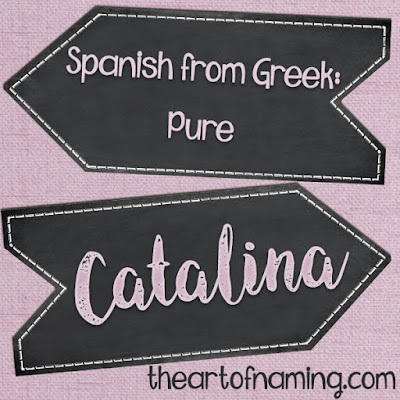 It is a Spanish form of Katherine. Now, I've always seen Katherine-type names meaning "pure" but after looking deeper into possible meanings, I'm not so sure which is truly "correct."  Here are the original possibilities:


Eventually, these were put on the back-burner and Katherine solely became associated with the Greek καθαρος (katharos) meaning "pure." To ensure that this would be the most popular meaning, early Christians changed its Latin spelling from Katerina to Katharina.

As for Catalina, it seems to be used most often in geography. There is a city in Arizona, an island off the coast of California, and another island near the Dominican Republic, just to name a few of the many.

As a given name for girls, it is used all over the Spanish-Speaking world including actresses and musicians and athletes from Argentina, Cuba, Colombia, Ecuador, Chile and Mexico. There are several Catalinas from Romania as well since they use the same spelling.

I think it is gorgeous! I would use this instead of Catherine or Katherine and use the classy nickname Kate, the cutesy nicknames Cat or Cata (cah-tah) or the lovely and unique Lina.

Whether you have any Spanish roots or not, what do you think of this lovely name?

There's an Australian celebrity called Jacki O with a daughter named Catalina - she uses the nickname Kitty for it (very cute).

PS There's a pornographic actress with my name too - several in fact!