Girl Name of the Week: Clara

The Girl's Name of the Week comes straight from this week's list of top baby names from Switzerland: Clara. It ranked at #8 in French-Speaking Switzerland. 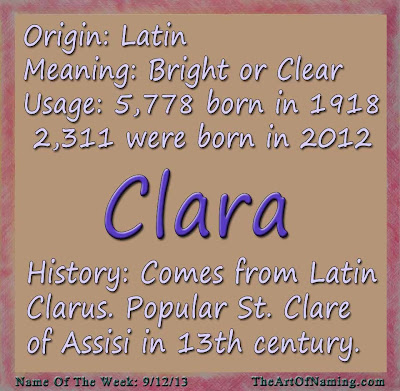 Clara is a Latin name that means "bright or clear." It originates as a feminine form of the Late Latin name Clarus which itself was the name of a few early saints. Saint Clare of Assisi made this name popular in the 13th century. She left her wealthy family to found the order of nuns called the Poor Clares.

Clare was the most popular form through the middle ages, and Clara became hot in the 19th century.

It has also been featured on my up-and-coming vintage names list according to the 100 year rule. It was most popular in 1918 when 5,778 baby girls were born!

In recent years, Claire has been the more popular sister, while Clara was very Olde World and European. Now that Clara is coming back into fashion with all of the other vintage chic names, I can only foresee her continuing to climb the charts over the next decade.

Clara is such an adorable and lovely name that she could be paired with a variety of names! What would you pair it with? Also, do you pronounce it Clarr-uh or Clare-uh?

Clara is a beautiful name, and I'm not surprised it is rising in popularity.

I would have used it myself, but then I discovered some people pronounce it like Claire-uh, so that put me off a bit.

We would have paired it with family names, and I most often see Clara Elizabeth, Clara Rose or Clara Mary/Marie in birth notices.