From our previous article listing names ending with the letters "-sy", we find a diamond in the rough. The most popular name on the list is Daisy. 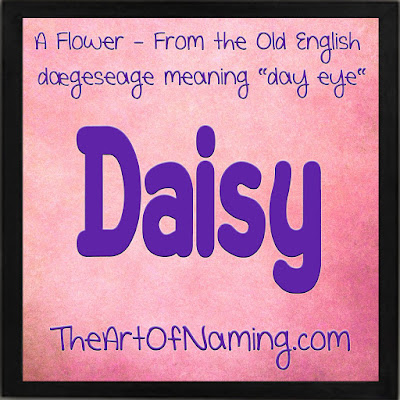 This pretty name is directly related to the flower. However, it also derives from the Old English word dægeseage meaning "day eye".  Daisies belong to one of the largest families of plants in the world. Often they have a yellow center and come in a variety of colors, with white being perhaps the most common. .
Sometimes Daisy is used as a nickname for Margaret. It happened in a round-about way due to the French name Marguerite becoming associated with the daisy in French. Margaret means "pearl" in Greek, and daisies were considered "pearls of the field" or "marguerites".  So Marguerite, and the Spanish Margarita, gained association with Daisy and Daisy became a nickname for Margaret.

In pop-culture, there is the animated Daisy Duck of Disney fame. There was also a character on the 1980s TV show Dukes of Hazzard named Daisy Duke, after whom short denim shorts were named. There was the film Driving Miss Daisy, and the character of Daisy in the book Great Gatsby. Currently, rising actress Daisy Ridley of the newest Star Wars films is helping give the name Daisy more familiarity, which could lead to more usage.

Daisy hasn't reached mega-popularity yet, which still allows it to be a somewhat unexpected choice among all the other options. It is a botanical name which fits in well with Lily, Violet and others in the floral-name club; and it also has some vintage appeal. If you are considering this name, here are some ideas for sibling names and middle names:

What would you pair with Daisy?

Written by The Art of Naming at 3:30 AM No comments: 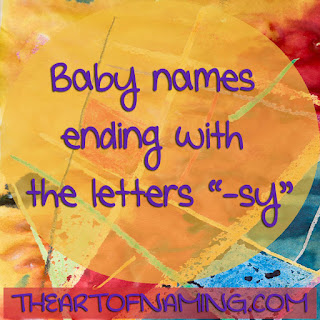 This series is nearing the end of the alphabet. With the letters -sy, we find several interesting names. Some of these are more on the nickname side, but usable nonetheless.  Are there any names below that you would considered? The most popular options are undoubtedly Daisy, Maisy and Tansy.

Notice how there are many more options for females than males. Can you think of any others that could be added to the list?

Do you like any of these? Share your thoughts in the comments!  And view the other articles in this series focused on "name endings".
Written by The Art of Naming at 3:30 AM No comments:

Updated: My Favorite Names Per Letter and How They Changed From 2010 to 2018

Being the "Name Nerd" that I am, I have been keeping a list of my favorite names per letter on a yearly basis. I recently compiled these lists and sorted them out alphabetically and chronologically. I started making the list back in 2010, the year I got married and we started pondering names for potential future children. We had a son in 2012 and a daughter in 2014 whose names made the list.

I have continued to keep track of my favorite names since then, and will continue to do so, but after 8 years of this, I decided it would be fun to share my choices. I wanted to see how time has drastically changed my style for some letters, and yet has been untouchable for other letters. I have just finished posting these weekly on my Instagram if you would like to browse there and see my thoughts and explanations per letter. Here we go: 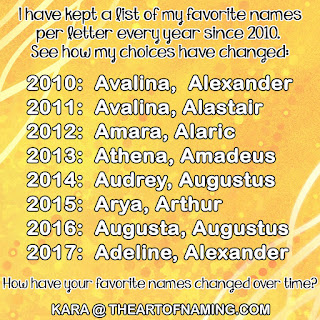 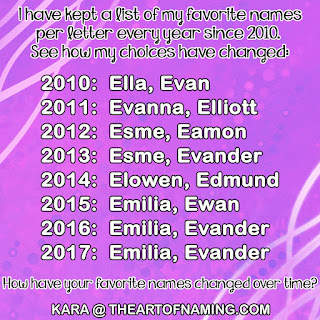 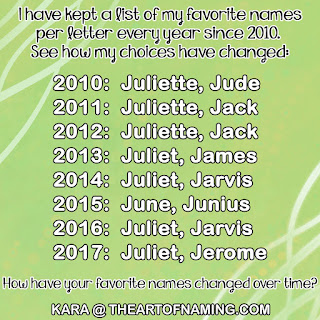 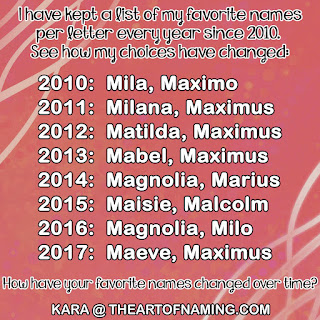 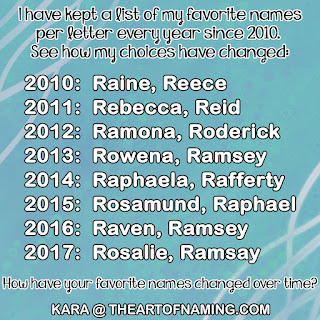 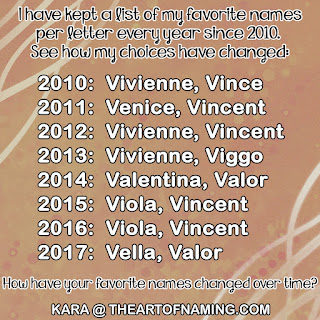 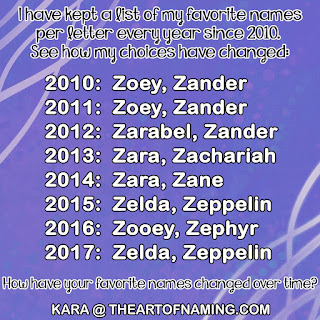 
Which set of names do you like best?  Share your thoughts and observations in the comments below!
Written by The Art of Naming at 3:30 AM No comments: