Name of the Week: Javier

The Boy Name of the Week comes straight off the list of Spanish Boy Names: Javier!

Javier is the Spanish form of the name Xavier. Both of these names come from the Basque place name Etxaberri which means "the new house". Over time, it became Exaberri, then dropped the beginning e and final i. The X was originally pronounced with more of a "sh" sound. 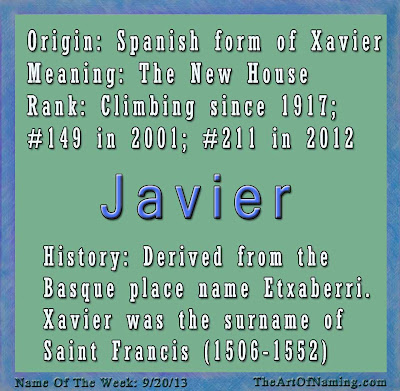 With influences from English, French and Spanish, pronunciation varies. Javier is typically pronounced the Spanish way "hab-YAIR" with a sort of combined b and v sound. In Portuguese, it still has a "sh" sound in place of the X. French would say HAV-ee-ay, and in English it is most correctly said ZAV-ee-er even though famous characters like Charles Xavier from the X-Men comics have influenced the pronunciation of X-ay-vee-er.

A notable Xavier was St. Francis Xavier, or San Francisco Javier in Spanish (1506-1552). Once he gained fame as a Jesuit priest and missionary, many places and people were named after him and therefore Xavier and Javier also gained popularity.

Javier was a place (town? city?) within the Kingdom of Navarre which was located between present day Spain and France on the Spanish side.

What would you pair it with?  Source | Source

"Javier is typically pronounced the Spanish way "hab-YAIR" with a sort of combined b and v sound."

That's the South-American Spanish pronounciation.
-
In Spain it's pronounced gutterally, like the "ch in Loch"

see and hear :
http://www.howjsay.com/index.php?word=javier
(put the mouse cursor on the name)