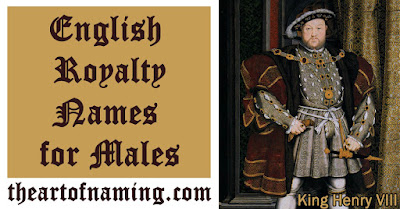 How long have there been rulers in England? At least on record, we can trace their names pretty far back. For a while, the kingdoms were separate and set up differently than today. Currently, Queen Elizabeth II reigns over Great Britain and Northern Ireland. Scotland, Ireland and Wales have all had their own rulers over time before becoming united as they are now.

There have been many ruling Houses overtime and those rulers have had some interesting names. I didn't include some of the really early rulers since their names are unlikely to be used today and there are so many of them. We'll look at some of the more traditional names that are still in use such as William, Henry and John.

I won't pretend to be a historian. This won't be a history lesson. We are simply taking a look at some of the names that have been in use in England in the past until now. I won't be including the names of every single ruler since that'd be a very long list, and borders and dates get a little complicated. This article will focus on the male rulers and our next article will feature female rulers.

The name Edward comes from Old English elements meaning "rich guard". This is one of a few Old English names that survived time and was not replaced by the names brought to England by the Normans. In the US, Edward ranked best between the 1920s and the 1960s. In 2014, it was #160.

Edmund comes from Old English elements meaning "wealth" and "protection". Like Edward, this name remained in use after the Norman conquest but unlike Edward, it became less common over time. It was used in the US around 1920, a bit through the 1940s and 1950s but it declined after that. It has not ranked in the Top 1000 since 1997. There were only 172 boys named Edmund in 2014.

Edred means "rich counsel". It comes from Eadræd from the Old English elements ead meaning "rich, blessed" and ræd meaning "counsel".  It has never been in use in the US.

Edwy comes from Eadwig which is derived from the Old English elements ead meaning "wealth, fortune" and wig meaning "war".  It has not been used in the US.

Edgar is derived from the Old English elements ead meaning "wealth, fortune" and gar meaning "spear". It ranked well around 1918, declined, then regained popularity recently through the 1990s-2000s. It's back on the decline now but still ranks at #300 in 2014.

Alfred means "elf counsel". It is derived from the Old English name Ælfræd, which is composed of the elements ælf meaning "elf" and ræd meaning "counsel". Alfred has always ranked in the Top 1000 but it's ranking down toward the bottom of it these days. It peaked in 1928 with 6,246 births. In 2014 it ranked at #799 in the US.

From the Old English name Hereweald which is derived from the elements here meaning "army" and weald meaning "power, leader, ruler". It is also similar to the Old Norse name Haraldr which was popular with the Scandinavians living in England. Harold lost popularity after the Norman conquest until it was revived again in the 19th century.  It has really only done well in the US around 1920. It declined in usage after the 1940s but it still ranks within the Top 1000 even now. In 2014, it was at #828.

William comes from the Germanic name Willahelm which was composed of the elements wil meaning "will, desire" and helm meaning "helmet, protection". This name was common with the Normans and very popular in England. William has almost always been a Top 10 name, never ranking lower than #20. It has ranked at #5 from 2012-2014 in the US.

The name Henry means "home ruler". It comes from the Germanic name Heimirich which is composed of the elements heim "home" and ric "power, ruler". It was a popular royalty name in Germany, as Heinrich, for many years. France used Henri. The Normans took this name to England and it became common there as Henry. Henry ranked well around 1918 and in the 1940s. It has always ranked within the Top 200 names in the US, most recently gaining popularity again for a rank of #33 in 2014.

Stephen comes from the Greek name Στεφανος Stephanos meaning "crown". Respecting the Greek pronunciation, it's said the same as its anglicized form Steven. This is another name made popular in England by the Normans. It was also commonly used by Christians in honor of St. Stephen. Stephen was most popular in 1952, the late 1960s and the mid 1980s. In 2014, its down in popularity, but it still ranks at #258 in the US.

Eustace is the English form of Eustachius which comes from the Greek Eustachys meaning "fruitful", or possibly it comes from Eustathius and Eustathios meaning "well-built, stable". Eustace was mostly used between the 1910s and 1960s but it was never popular. These days it is nearly extinct, but there were 7 births in 2014 and 5 in 2011. Before that, there weren't any since 5 in 1997. Rare indeed.

The name Richard was introduced to England by the Normans. It means "brave power", derived from the Germanic elements ric meaning "power, rule" and hard meaning "brave, hardy".  In the US, Richard was a Top 10 name from 1920 to 1970. It's currently at a low point of #141 in 2014, but that still accounts for 2,857 births for the year.

John comes from the Latin Iohannes which comes from the Greek Ioannes, which is derived from the Hebrew Yochanan meaning "YAHWEH is gracious". This is possibly the most popular boy name of all time. It first flourished in early Europe, eventually being given to 1 in 5 boys by the Middle Ages. In the US, it ranked at #1 from 1880-1923 and remained in the Top 10 until 1985.By 2014, it slipped to #26.

Louis is the French form of Ludovicus which is the Latinized form of Ludwig. Ludwig is derived from the Germanic name Chlodovech which comes from the elements hlud meaning "famous" and wig meaning "war". This name was used for 18 kings of France, but only an unofficial temporary ruler of England. It was usually spelled as Lewis in England, but not for royalty. Louis was most popular in the US around 1918. As of 2014, it ranks #289.

James has taken over as the new overall most-popular boy name of the last 100 years since John's popularity has fallen.  James comes from the Late Latin name Iacomus which comes from the Greek Iakobos and the Hebrew Ya'aqov. James was a Top 10 name from 1880-1992, including a number of years at #1. In 2014, it returned to #9.

Oliver comes from the Norman French name Olivier which is a form of the Germanic name Alfher. That comes from the Old Norse Áleifr or Olaf meaning "ancestor's desendant". However, the spelling and meaning of Oliver was later altered by the Latin oliva which means "olive tree". While the name has always been in the US Top 1000, it's really climbed the charts in the past decade. In 2014, it was #32.

1653-1658 Oliver Cromwell (Not a King, but the Lord Protector of the Commonwealth of England, Scotland and Ireland)

George comes from the Greek name Georgios which comes from the Greek word georgos meaning "farmer, earthworker". That name itself was derived from the elements ge meaning "earth" and ergon meaning "work".  In the US, George was most popular around 1920 and 1947. It declined since then but still ranked at #134 in 2014.


This is a somewhat limited list of rulers, but these are some excellent names. While you probably won't meet anyone named Æthelbald, you surely know someone with one of the more traditional names.

George was used recently for the son of the Duke and Duchess of Cambridge.  If Will and Kate were to have another son, what do you think they would name him? Using the names above, what would you name a royal prince?
Written by The Art of Naming at 1:49 AM