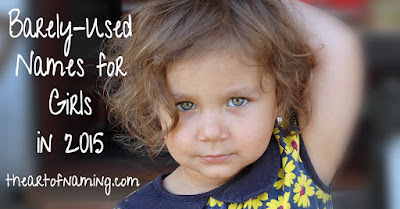 No doubt you heard about the social security administration's yearly baby name list that came out a couple weeks ago for the US in the year 2015.  As you know, the #1 name for the year was Emma for girls. They also published the Top 1000 names for each gender. Did you know they also have data available for the names beyond the Top 1000?

I often have parents ask me for "unique" name ideas. Now, it is hard to define what is truly unique because everyone has different definitions. Perhaps I've never met someone named Aspen or Mara but once I suggest those, you happen to have known a few and suddenly those aren't really all that unique to you even if they are to me. The best way to determine if a name is more on the unique side of things is to look at the data.

If a name is in the Top 10, there will probably be many kids with those names in the same school, which some parents want to avoid. The farther down on the list you browse, the less likely it is you will find another kid with the same name. If you completely avoid the Top 1000 altogether, you are more likely to be "unique" than not. At least in your area.

To increase your chances of having an uncommon, one of a kind name, it helps to toss out names that are simply respellings of popular names. For example, in this series, I will not be featuring any names that are similar to one that already ranks in the Top 1000.  Since there are names like Adeline (#135), Adelyn (#193), Adelynn (#275) and Adelina (#545) in the Top 1000, I would not be featuring Adilene (#1136) or Addalynn (#1150) because of their similarity. However, there aren't any other names like Poppy so it will be discussed below.

With all of that said, I want to welcome you to this new series that features ten barely used names per month. We'll explore our way down the list and cover more and more uncommon names as we go. In the parenthesis, the number of births for 2015 is listed, followed by the rank. First up:

Mavis (263 births - #1012)
Mavis comes from the Old French word mauvis which means "thrush" and relates to a bird called the song thrush. Mavis may also mean "purple" in Greek. It was first used in the US for girls in 1893. It was most popular in the 1920s and 1930s, but it has declined in popularity since then. It dropped out of the Top 1000 by 1964, only recently has it gained usage, climbing up to its current rank which is just shy of the Top 1000.

Mercy (263 births - #1013)
Mercy was one of the 17th century Puritan names, now considered a virtue name. It comes from the Latin merces which means "wages, reward" and is a version of the Latin merx meaning "goods, wares". It has been in use on record in the US since 1881. It was never within the Top 1000 names until it sneaked in at the bottom from the years 2012-2014. It dipped back down in 2015. Could it continue upward in the coming years?


Antonella (260 births - #1018)
Antonella is a female form of the Latin Antonius, which is a Roman family name. Its original meaning and origin are unknown but this family of names has become associated with the Greek anthos which means "flower." That's why that "h" is added into the boy name Anthony, but is generally left out of other forms like Antonella and Antonia. Antonella has only been around since 1954 on record in the US and is getting close to making its first appearance in the Top 1000. Sister name Antonia is ranked only 4 spots higher in 2015.


Poppy (257 births - #1033)
While this name is very rare in the US, it's extremely popular in the UK, ranking as high as #5 in England and Wales recently. It comes from the Old English popæg which is also where the red flower gets its name. It first had usage in the US in 1919 as a name, but it has been inconsistent. It wasn't sued between 1983 and 1998 on record. Now, it's knocking at the door of the Top 1000.  Will it join soon?


Ellery (254 births - #1039)
Ellery is an English surname which came from the medieval masculine name Hilary. It was derived from the Latin hilaris and the Greek Hilaros which mean "cheerful". Ellery was first used for boys as far back as 1884 in the US. The first female usage came in 1959. It only had 13 male births in 2015, but for girls, it is inching closer and closer to the Top 1000 every year.


Temperance (249 births - #1052)
Temperance implies moderation and self-restraint. Like Mercy, it is also a virtue name used by the Puritans after the Protestant Reformation. In the US, though, it wasn't used on recent records until 1972. It has increased since 2006, likely influenced by the main character from the TV show Bones . It ranked in the Top 1000 from 2011 to 2014 but dipped below in 2015. Could it climb again or has it had its fun?

Belle (248 births - #1053)
Despite the super popularity of Isabella (and Isabelle, Isabel, Isobel, etc), Belle has somehow managed to remain uncommon. While it may be considered a short form of one of those (or other -belle names), on its own, it is the French word for "beautiful". It had the most usage between the 1880s and the 1930s before dipping down low. It's climbing a bit lately and is just on the outskirts of the Top 1000 chart now, on which it has not ranked since 1934.

Which of these barely-used girl names do you enjoy most? Do you think any of these could gain more usage soon and become common or even popular in the coming years?
Written by The Art of Naming at 6:30 AM