From our new series, Darby is today's featured "-by" name. 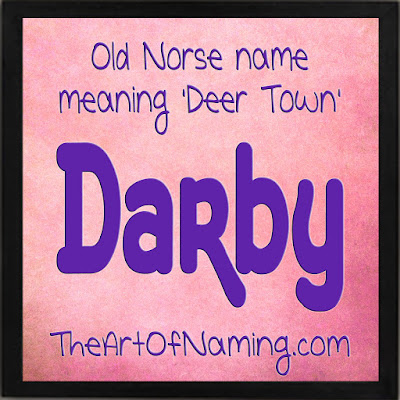 Darby is both a masculine and a feminine name. It originally comes from the name Derby which is an Old Norse name meaning "deer town". Derby is the name of a town in England which lent itself to becoming an English surname as well. That's where Darby comes from.

There is an interesting proverbial phrase used by the British called "Darby and Joan" which refers to a married couple who are celebrated for their mutual devotion to one another. It is used to describe a couple that are content to share a quiet life together.

This saying was first mentioned in print as a poem by Henry Woodfall in 1735 which featured John Darby and his wife Joan as the main characters. Another poet named St. John Honeywood wrote something similar as well shortly after. These two poems aren't the only mentions for Darby and Joan since it is a common phrase.

So what do you think of this name? Would you use it for a boy or for a girl? Since we're highlighting it as a girl's name today, we'll also explore some middle name ideas for her, along with ideas for names that would work for a sibling of a Darby:

What middle name would you pair with Darby? And what would you name her siblings? Share your thoughts in the comments below!
Written by The Art of Naming at 6:00 AM