Taken from our article about names ending with the letters "-hy", we found the name Dorothy. 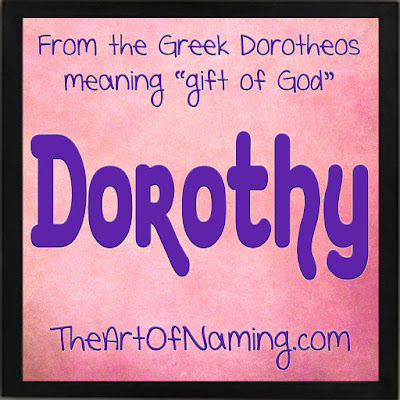 Interestingly, the names Theodora and Theodore (and their variants) also come from theos and doron, but their direct Greek origin name (Theodoros) is a little different: Θεοδωρος. However, all of these names do share a meaning.

Perhaps the most well-known Dorothy comes from literature and film. In 1900, an author by the name of L. Frank Baum published a little fantasy novel called "The Wonderful Wizard of Oz" featuring a young girl named Dorothy as the main character. Portrayed by actress Judy Garland in the 1939 film, Dorothy has become a classic and iconic character in pop culture.

You don't meet all that many "young Dorothys" these days. However, that could be changing in the next decade or two since this name is starting to trend upward. That would make this name a vintage choice that would fit in with the 100 year rule.

Since it has almost been 100 years since her first heyday, do you think Dorothy will regain popularity as a "fresh-sounding" name again through the 2020s-2030s?

Use it now and you'll be ahead of the trend! If this is a name you're considering for a daughter, here are some ideas for middle names and sibling names:

I kept the styles similar to Dorothy, but there are plenty of more modern names that could also work. What would you pair with Dorothy?  Do you know anyone with this name? If so, how old are they?
Written by The Art of Naming at 3:30 AM