Potentially Hyphenated Names Used for Boys in the US

Have you ever met someone with a double-barreled first name? Two first names strung together by a hyphen? It happens often enough to be a thing, but yet it is still somewhat rare depending on where you live.

There could be a number of reasons why parents would opt for a hyphenated name. Perhaps they couldn't narrow down their favorites and decided to use them all. Perhaps they'd like to honor two people in one name. Or maybe they just like how the two names sound together. Hyphenated names do get used often, even here in the US, however none of them have managed to get enough births per year to rank all that high. The majority of the names on this list have less than 20 births per year.

Since the SSA's data doesn't account for any hyphens and writes it all as one name, it is impossible to know how these names are truly intended to be written. Perhaps the name was meant to be written as one, or maybe the child received two first names rather than a first and a middle.

There could be some that were written with spaces. For example, it is unlikely that Juandedios or Angeldejesus are one word or hyphenated, but that's how it came up in the data. These are probably listed as Juan de Dios and Angel de Jesus in the "first name box". 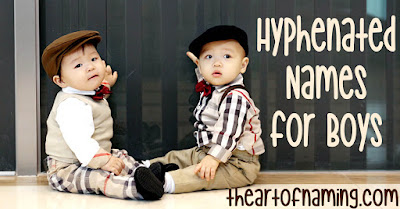 Latin Combination names (Spanish, Italian, even French):
These could be one name. These could be hyphenated. Or these could be spaced as two first names. It is hard to tell from the data. How do you imagine the following names would be written?

I suspect that many of these are double first names rather than actually hyphenated, but since we can't know for sure, they have been included here.  Which do you like? Are there any that you think do not flow well together?

Stay tuned for the list of potentially hyphenated girls' names. It is SO much longer than this list!
Written by The Art of Naming at 6:30 AM