Welcome to Part Four of our series that features names that are barely used in America today. These names all rank beyond the Social Security Administration's Top 1,000 chart. You could even say they are "unranked" since that chart is the official list of the most popular names and it ends at 1,000 on their site unless you download the full set of data. 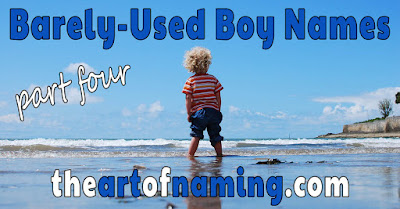 So are you looking for an unranked name? If so, you are following the right series! I combed through the data and found interesting options that aren't similar to any other names that do rank. These are one of a kind and very wearable for a modern boy. More than half of them are originally surnames, which is part of a trend these days: surname names for given names.  Let's get started:

Broderick (158 births - #1166 in 2015) This is a surname derived from both the Irish and Welsh languages. It is Anglicised from the Irish Ó Bruadair, meaning "descendant of Bruadar". In Welsh, it is Anglicised from ap Rhydderch meaning "son of Rhydderch", which means "reddish brown". It gained usage as a given name in 1950, ranking at the bottom of the chart for many years.

Ansel (157 births - #1171 in 2015) Ansel is also a surname and it was derived from the given name Anselm. Anselm is composed of Germanic elements ans meaning "god" and helm meaning "helmet, protection". This name has been around since 1882 but it has never been common enough to rank in the Top 1000. However, it is getting close.

Keller (157 births - #1176 in 2015) Keller is an Irish name that has been Anglicised from the Old Gaelic surname Ó Céilechair meaning "descendant of Céilechair", which means "companionable". In German, Keller refers to a cellar, taken from the Latin Cellarius. This name has infrequent usage over the years, starting in 1911 for boys and 1961 for girls. It steadied by the 1980s but it has never been common for either gender.

Ledger (157 births - #1177 in 2015) - As a word, ledger comes from the Dutch liggen or leggen meaning "to lie or lay", or the German liegen or legen. When taken from the Dutch legger it refers to a book laying in one place. It came to be used as a term for a book of financial accounts. As a name, it may have come from the Norman Leodegar or the Old French Legier. Whatever the meaning and origin, this surname is a bold and interesting choice for a male given name, and would honor the late actor Heath Ledger. It has only been in use in the US since 2002 and never within the Top 1,000.

Brogan (155 births - #1185 in 2015) - This is an occupational name taken from the Irish word bróg meaning "shoe". Google defines brogan as a coarse, stout leather shoe reaching to the ankle. This is definitely an interesting choice for a name, but it is made up of stylish sounds that would work well on a boy today. In the US, this name has been used since 1983 on record.  It even ranked in the Top 1,000 from 2008-2012. Could it have another chance to climb the charts soon?

Smith (154 births - #1194 in 2015) - The #1 most common surname in the US is Smith. Even though it is used on more than 2 million people as a last name, it would actually make for an unexpected first name. People have thought so since 1880 but it has never been common and still ranks below the Top 1,000 as a first name. Of course, it is an occupational name that refers to a metal worker or a "blacksmith".  It comes from the Old English word smiþ which is related to smitan meaning "to smite, to hit".

Adler (153 births - #1196 in 2015) - Adler is a surname name that comes from the German word adler meaning "eagle".  This name feels like one that could have been used 100 years ago, but it never made it on record until 1985 for boys and 2005 for girls. It is gradually increasing in usage for boys, although it ranks below the Top 1000 for both genders.

Wallace (153 births - #1201 in 2015) - From the Norman French word waleis, Wallace means "foreigner, stranger". It is sometimes used to denote native Welsh and Bretons. Another spelling is Wallis. For boys, Wallace peaked in 1923 with 2,803 births for a rank of #69. It hasn't been nearly as popular since then.

Which of these names do you like the most? Would you ever use one? If so, share your thoughts in the comments below!
Written by The Art of Naming at 3:00 AM