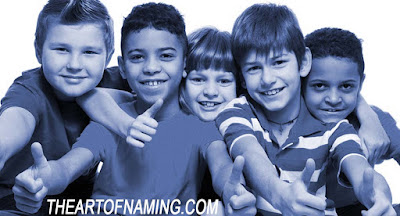 Creating a great first and middle name combination should take some serious thought and a little bit of research. The more effort that goes into it, the better the name will be, usually. I thought I’d provide a few examples to show my step-by-step thought process for pairing two names together. Here are five boy names that flow well together. The first names are of the “ancient” style and the middle names are classic, traditional choices.

1. Atticus comes from a Roman name that means "from Attica" in Latin, which is a location in Greece. It has a solid background in that area of the world and in history because of a couple philosophers who had the name. Atticus has only been used in the US in the past thirty years or so, breaking into the Top 1000 in 2004. William, on the other hand, also has a very strong history in the form of kings and poets and authors. It has been used in the US in mass quantities since before records began in 1880. Atticus William flows well as a whole name. These names are very strong together without overdoing it and they have a nice popularity contrast. Atticus ranked at #360 in 2016 while William was #3.

2. Dante is the medieval form of Durante and also has ties to the 13th-century Italian poet Dante Alighieri. This name has been in use in the US since 1908, gaining a boost in popularity around the late 1990s. It has been ranking consistently in the 200-300s since then, including #344 in 2016. Oliver also has some ancient ties to the middle ages, but it has always ranked fairly well in the US giving it a classic vibe. In fact, Oliver is on the rise, ranking at an all-time high of #12 in 2016. With a 2:3 syllable count, Dante Oliver flows nicely and offers enough of a popularity contrast to stand apart from the crowd.

3.  Apollo dates way back to Greek mythology as the son of Zeus and Leto, and twin brother of Artemis. This name is definitely ancient and strong. James is also an old name, dating back to biblical times, but it has remained modern. James is actually the #1 boy name for the past 100 years, topping John for the title. As a result, it is possibly the most common middle name as well. However, since Apollo is still somewhat unusual with a popularity ranking of #584 against James' #5 in 2016, the two work nicely together. Apollo James as a whole sounds strong and is full of history.

4. The Greek Cyrus dates back to several ancient kings of Persia including the biblical Cyrus the Great. It is known as Kurush in ancient Persia and Kyros in Biblical Greek among other international variations. Alexander also has strong ancient and biblical history, as well as a namesake known as Alexander the Great. Cyrus ranks at #427 in 2016 and Alexander is at #11 in the US. These two names just go together. Cyrus Alexander is strong, bold and, well, great!

5.  Many may not realize that Dominic is an old name. It comes from the late Latin Dominicus meaning "of the Lord" and was the name of several saints, dating back to around the year 1000. There was also the Dominican order of friars in the 13th century. I paired Dominic with the middle name Theodore which comes from a Greek name meaning "gift of God". This name has remained rather traditional today but it actually dates way back to several saints too, at least to the 4th century. Dominic Theodore sounds very modern but it is actually a very old combination whose meanings happen to be quite compatible.

Do you find yourself drawn to any of the above examples? Feel free to use them if you’d like! These are just a few names within a very specific theme that caught my attention. Stay tuned for a similar list of female names next week!
Written by The Art of Naming at 3:30 AM