I selected four French boy names and threw them in a poll on the blog. You voted and Olivier was barely the winner with 14 votes, sneaking past front-runner Laurent in the 11th hour. So let's take a look at the French name Olivier as we kick off French-Week! Stay tuned for our World-Wide Wednesday post about French naming customs too, and a girl name on Friday! 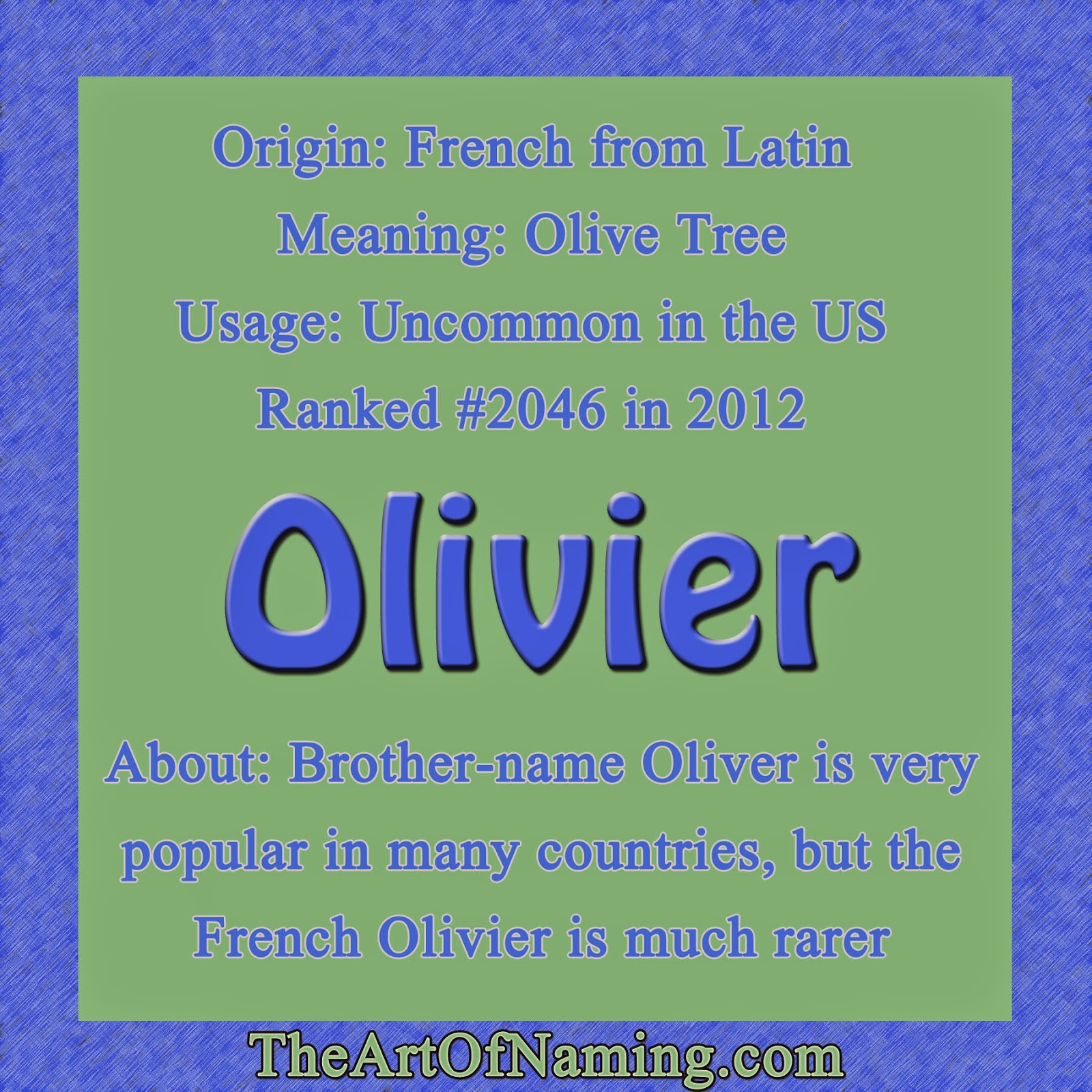 Parents are in love with Oliver today. Nameberry describes it as "energetic and good-natured, stylish but not nearly as trendy as twin-sister Olivia, with a meaning symbolizing peace and fruitfulness." The French Olivier may have pronunciation problems in the US along with sister Olivie, however there are also other similar options such as the Spanish Olivero and the Italian Oliviero. Olive is also becoming a favorite for girls.

With the following pronunciations, o-lee-VYAY (French), O-lee-veer (Dutch), Olivier isn't exactly rolling off American tongues the same way Oliver is. Both of these names may come from either the Germanic name Alfher or the Old Norse name Áleifr. They became more popularly influenced by the Latin oliva over time which means "olive tree". According to Behind the Name: "In the Middle Ages the name became well-known in Western Europe because of the French epic 'La Chanson de Roland', in which Olivier was a friend and advisor of the hero Roland.

In England Oliver was a common medieval name, however it became rare after the 17th century because of the military commander Oliver Cromwell, who ruled the country following the civil war. The name was revived in the 19th century, perhaps in part due to the title character in Charles Dickens' novel 'Oliver Twist' (1838), which was about a poor orphan living on the streets of London."

Both of these names clearly have some solid history behind them in Europe since medieval times, and if you take a look at Behind the Name, you'll see a long list of Oliver's popularity around the world! Oliver is ranked pretty high in several countries, but what about their popularity in the US today?

While Oliver is enjoying plenty of usage at #73 in 2012 in the US, the French spelling of Olivier is not very popular.  Olivier ranked in at #2046 which means only 67 boys were given the name. It has only been in regular usage since the 1960s whereas Oliver dates back in the US to 1880 with a bit of a popularity boost around 1920.   Olivier ranks #282 in England/Wales, #348 in France and #43 in the Netherlands.

If you have any French ancestry or a French last name, Olivier is a wonderful choice! However, non-French Americans seem to flock towards Oliver instead. Which do you prefer? Using the American format of a first and middle name, what would you pair with these? Here are some ideas I came up with for each:

What do you think? What sibling or middle name ideas would you add?