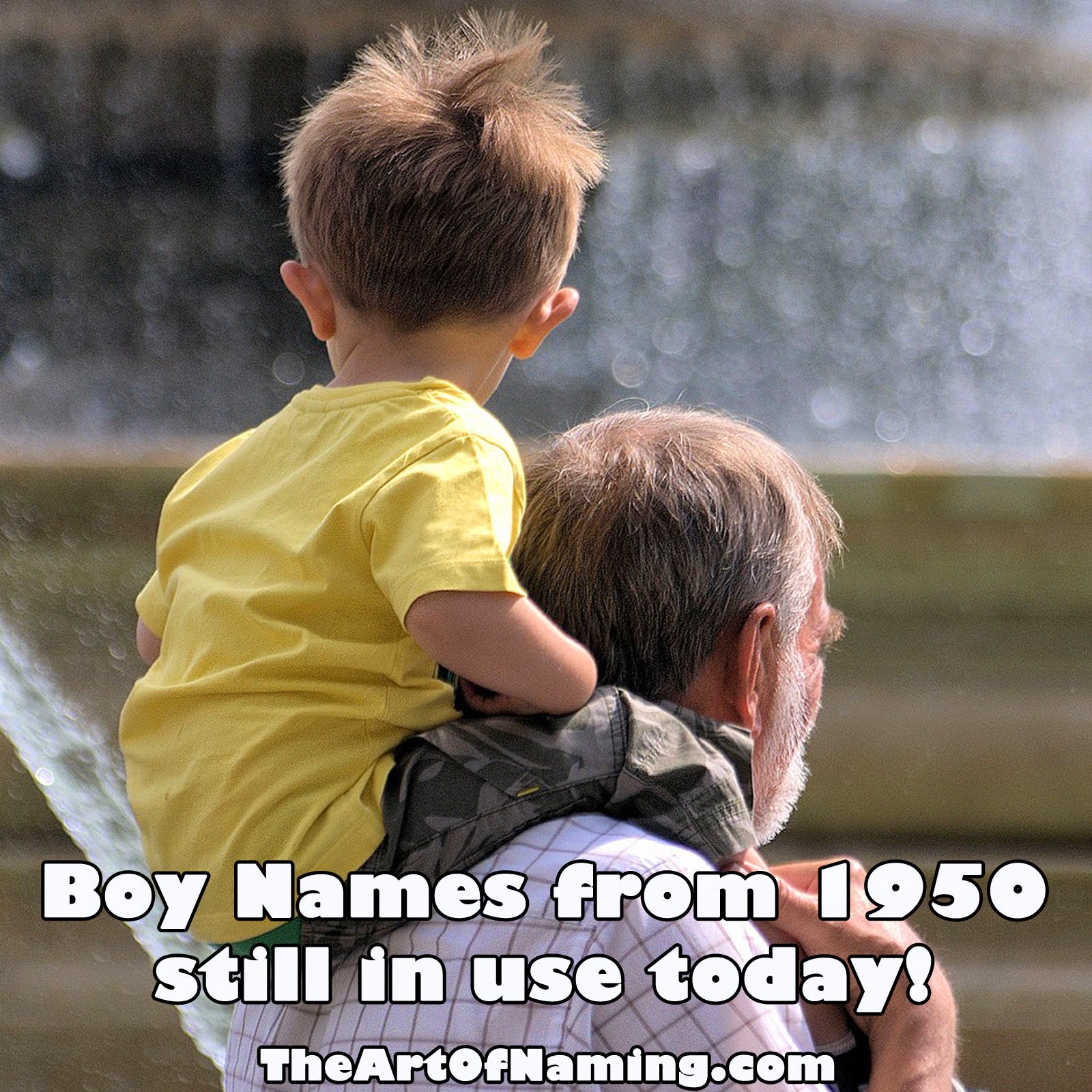 Let's take a look at the past! The year 1950 was smack dab in the middle of the century. Babies born that year will celebrate their 65th birthday this year. Many of them are grandparents now and may even be lending their own names to their grandchildren.

The most popular boy names in 1950 were James, Robert, John, Michael and David. How did these names rank 63 years later in 2013? Well, most of them are classics that don't fade very far down the charts. In fact, James, Michael and David are still in the Top 20 today. Here's how the 1950's Top 25 names rank in 2013:
As you can see, all of the boy names that were in the Top 25 in 1950 are still within the Top 600 in 2013!  I found it interesting that even though some of these seem very dated, they're still hanging around and being used. Specifically, I was a little surprised to see Gary, Larry, Ronald, Donald, Dennis and Jerry still ranking as high as they do. Do you know any babies with these names? I'd wager that many of them are named after a relative but perhaps not all of them!

Next, I went through the Top 1000 names of 1950 and chose a single favorite per 100 names. These are names that are either fashionable and climbing the charts today, or names that I'd like to see get more usage! If you'd like to play along, browse the chart at the SSA website and in the comment section below, post your favorite names, one per every 100 names!

#99 - Theodore
The nickname Theo seems to be a big draw lately. This name ranked #99 in 1950 but has declined in usage since then. In the past decade, though, it has started regaining some popularity, ranking at #170 in 2013. This is one of my favorite classic names but I tend to love it more in the middle name spot!

#371 - Woodrow
You may think me a bit nutty for this one, but there's something appealing about Woodrow. Perhaps it's just Toy Story and Cheers nostalgia because of the nickname Woody. This name spiked majorly around 1918 because of President Wilson, but it's been off the charts since then. In 2013, it ranked way down at #3314. I doubt it'll ever come back, but I like it anyway.

#468 - August
It is no secret that this name is zooming up the charts today. Overnight, everyone and their grandmother seemed to suddenly love the name August. It was big in 1915 but fell mostly out of sight since then. It ranked at #468 in 1950 but fell even lower than that afterward. It wasn't until recently that it's climbed again. Now in 2013 it is up to #319 and I imagine it'll keep on going!

#588 - Bennett
Parents seem to love surname names these days. A new trend of names ending with -et is growing for both genders, too. Bennett ranked down at #588 in 1950 but it has been in an upward trajectory since the 70s. It is up to #194 in 2013 and will probably continue gaining popularity.

#627 - Fletcher
This is another surnamey, occupational name that is rising quickly today. Fletcher seems to be a new favorite lately. It ranked at #627 in 1950 but it nosedived off the charts thereafter. Only recently have people rediscovered it. It's now up to #790 in 2013 and has the potential to be the next big thing soon.

#847 - Leonardo
Like Theo, Leo is becoming a go-to nickname. Leonardo ranked down at #847 in 1950 but it has actually been climbing the charts since then. DiCaprio gave it a boost after 1997 and today it ranks at #131 in 2013. I don't see it leaping up the chart but it'll definitely keep inching its way toward the top.

#967 - Jarvis
Jarvis is a cool choice. It feels old but new at the same time. And that stylish V doesn't hurt! A cool namesake is that of Iron Man's advanced computerized helper J.A.R.V.I.S which stands for "Just A Rather Very Intelligent System".  The name Jarvis ranked way down at #967 in 1950, spiked in 1989 and has declined in usage again today. It is down at #1238 in 2013 but I think it deserves more love.

What do you think of my Top 10 picks from 1950? What would you have chosen? Share your thoughts in the comment section below! Thanks for reading!
Written by The Art of Naming at 8:00 AM