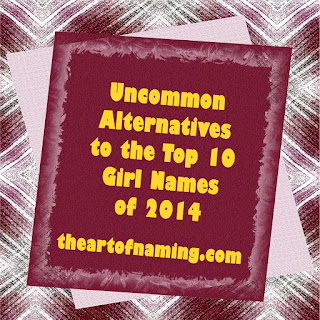 For those parents who may secretly like the sound of the top names but hate their popularity, I've created a list of alternative options to the Top 10 names for girls.

The names may be similar in sound, syllables, initial letter, meaning, origin or a combination of those. None of the alternate names below rank on the SSA's Top 1000 most popular names chart in 2014.

1, Emma ---> Amabel
The rare medieval name Amabel maintains a sound similar to Emma at the start of the name but it also offers the trendy "bel" sound at the end. It does all of this while still being an unusual name and a cool alternative to the popular Emma.  I can never believe that this lovely precursor to Annabelle can remain so unused. Amabel was only given to 5 baby girls in 2014 which is as opposite in popularity as you can get compared to the #1 name Emma.  Other options: Alma, Jemma, Amelina, Esme

2. Olivia ---> Octavia
These two names can easily be alternatives for each other sound-wise. They both start with O  and end with -via.  As far as nicknames go, these are also easily swapped: Liv and Tave or Livia and Tavia. If Olivia is too popular for you, try the always rare yet very familiar Octavia.  It was only given to 69 baby girls in 2014 which is very low compared to Olivia's nearly 20,000 births. Other options: Olympia, Vianna, Ophelia, Alba

3. Sophia ---> Seraphina
Seraphina is a great alternative to Sophia in terms of sound. Just like Amabel and Octavia above, Seraphina is a name that feels like it should have plenty of usage but it just doesn't. Except for 6 recorded births in 1916, Seraphina has only been around recently. It is gaining a bit of usage but still only received 175 births in 2014. It is pretty and unusual which is a great contrast to the popular Sophia.  Other options: Sonya, Sophronia, Delphina, Sapphira

4. Isabella ---> Isadora
Instead of focusing on finding an alternate name that shares the "bella" sound, I thought we'd focus on the beautiful "Isa" sound instead. The best option, of course, is the rare Isadora. Isadora has been around in the US since 1880 with regular usage except for a brief hiatus from 1958-1968. It's gained some momentum since then, receiving 167 births in 2014 but it is still far from ranking in the Top 1000.  Other options: Bellamy, Isabeau, Elizabella, Sable

5. Ava ---> Aviva
This interesting Hebrew name means "spring" and feels like a very refreshing alternative to the popular Ava. It maintains the same letters and sounds but adds a syllable which gives it a unique and cool vibe.  Aviva has been around since 1935 in the US but it has never been popular. With 94 births in 2014, this rare gem is an excellent choice! Other options: Aveline, Maeva, Evadne, Geneva

6. Mia ---> Pia
There aren't very many names that start or end with -mia. Finding a decent sound-alike name wasn't easy until I dropped the letter M and found rhyming name Pia. It is a Late Roman name that comes from the male name Pius and has actually been around in the US since 1908. In 2014, there were 71 girls given the name. It would be a lovely and unique alternative to Mia. Other options: Melia, Noemia, Mina, Magnolia

7. Emily ---> Romilly
If you're searching for something that sounds like Emily but is the opposite when it comes to popularity, Romilly is the name for you. With the ending of both names being identical, you really only exchange the E for the Ro but you get a very unique name. How unique? Well, Romilly has only been used in the US since 2013 for a total of 12 babies on record ever being given the name. Other options: Kirrily, Milani, Camellia, Amberly

8. Abigail ---> Abilene
Abigail may be popular but it has a unique sound all to itself. There are no other names that offer "gail" that I could find and only a handful of names starting with "Abi-". One solution is to find a less common biblical girls' name, another is to find something that simply sounds similar. In this case, you get a two for one deal with the rare, Hebrew name Abilene. Used briefly in the New Testament, Abilene means "grass" and has only been regularly used in the US since 1987. It was given to 48 girls in 2014. Other options: Gaia, Aberdeen, Fabiana, Esther

9. Madison ---> Madigan
If you're a fan of the nickname Maddie, Madison and Madeline aren't the only options. An unusual and interesting option is Madigan. It is very similar in sound to Madison but it isn't nearly as popular. It has been used in the US since 1992 with a high peak of 67 births in 2002. Now in 2014, it was only given to 15 girls. It's a cool, spunky alternative to the popular Madison.  Other options: Madelief, Madelena, Maude, Matilde

10. Charlotte ---> Harriet
The regal name Charlotte may rank at number 10 in 2014 but it seems posed to climb even higher, possibly even hitting number one in the coming years. Harriet has been around since 1880 with a real heyday during the '20s and '30s. It left the Top 1000 in 1971 and has been uncommon ever since. In the past two years, 127 girls were given the name Harriet which would be a lovely alternative name to Charlotte.  Other options: Arlette, Charlize, Liesel, Lottie

-
What do you think of my uncommon alternatives to these popular girl names?  Don't forget to check out the alternate names I chose for boys too!
Written by The Art of Naming at 6:30 AM