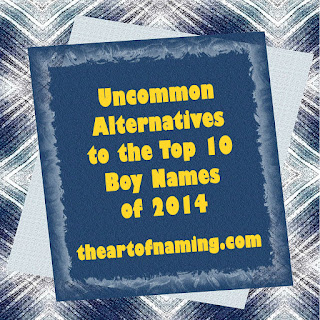 For those parents who may secretly like the sound of the top names but hate their popularity, I've created a list of alternative options to the Top 10 names for boys. The names may be similar in sound, syllables, initial letter, meaning, origin or a combination of those. None of the alternate names below rank on the SSA's Top 1000 most popular names chart in 2014.


1. Noah ---> Nahum
Nahum is the best alternative to Noah because it is also a biblical Hebrew name and it has a similar meaning. Noah means "rest, comfort" and Nahum means "comforter". It starts with the same letter, has the same number of syllables and they're both very vowel heavy. While Noah ranked at #1, Nahum sits nicely at #2076. Perfectly suitable to take Noah's place!  Other options: Noam, Enoch, Jonah, Nolan

2. Liam ---> Calum
Calum is a fun choice because it has the same ending sound as Liam and they both have Celtic roots with Liam being Irish and Calum being Scottish. Calum is a form of Columba, a Latin, saintly name meaning "dove". While Calum ranks down at #2452 last year, it does have a slightly more popular brother, Callum, that ranks at #729. Both are still much less popular than Liam at #2!  Other options: Alec, Leeland, Noam, Willem

3. Mason ---> Pierson
Mason is an occupational surname that refers to a stoneworker. What better alternative than a surname name referring to a rock? Pierson comes from the medieval name Piers which is a variant of Peter. Both of these names end with -son and they both come from Old French roots. It's cool and unusual and the perfect uncommon alternative since it ranked way down at #1301 in 2014. Other options: Cason, Colson, Stetson, Thatcher

4. Jacob ---> Javan
Jacob was the #1 name for many years only to begin its descent in 2013 when Noah took over. Javan has never even cracked the Top 1000, receiving only 52 births in 2014. Both 5-letter J-names are Hebrew but clearly have opposite popularities which makes Javan an interesting alternative to Jacob. Other options: Coby, Israel, Jaime, Séamus

5. William ---> Bertram
This was a tough choice. In the end, Bertram has similar, appealing qualities to William. Both names are derived from Germanic elements and both end with -am. While William has Will, Bertram has Bert. While Bert isn't as fashionable as Will at the moment, there's potential for it to come back and rank as well as it did in the 1920s. With barely 7 births last year, I find Bertram a handsome and truly rare alternative. Other options: Alaric, Edmund, Luther, Wilson

6. Ethan ---> Japheth
These two names take us from a popular biblical name to a rare one. Ethan may rank at #6 now but it wasn't always popular. It wasn't even regularly used in the US until 1911. Ethan gradually increased in usage through the 1970s until it exploded onto the scene in 1989 and zoomed up the charts, ranking as high as #2 in 2009 and 2010. Japheth was unheard of until 1970 and has slowly gained a handful of usage today with 43 births in 2014. Could it follow Ethan's pattern and someday be discovered in a big way?  Other options: Eben, Lathan, Ephraim, Irah

7. Michael ---> Micaiah
These two biblical names sound similar enough to swap and still keep everyone happy. Michael has been hugely popular for a very long time. There are Mikes everywhere. However, Micaiah  is relatively obscure. It has only been in use in the US since 1973. 2014 was its best year yet with 133 male births and a rank of #1311. There were also 41 female births.  Other options: Melchoir, Mischa, Mitchell, Malcolm

8. Alexander --->  Lysander
Alexander is a big, strong Greek name that has been used very well all around the world. Lysander is also a Greek name but it has a more tame and whimsical feel to it. Both end with "ander" which makes the rare Lysander a good alternative to the popular Alexander. It only had 43 male births in 2014 for a low, low ranking of #2764. Are you sold yet? Other options: Evander, Ferdinand, Constantine, Augustus

9. James ---> Ramsey
Without featuring a variant of James or a translation in another language, I wanted to find something uncommon that sounded similar. This one was very tough, especially since we also featured James' twin brother Jacob earlier. I settled on Ramsey. They have a similar sound  because of the "am" and "s" that should satisfy that quota, and they also have a potentially cool, bad boy vibe in common. Ramsey only had 93 births in 2014 for a ranking of #1649.  Other options: Hayes, Ellis, Hamish, Thiago

10. Daniel ---> Dashiell
These two names sound very similar to each other. Dashiell would work very well as an alternative choice for those who love Daniel but cannot use it. Daniel has always ranked well in the US but Dashiell has only been used in the US since 1979. It has never ranked in the Top 1000 and had only 123 births in 2014.  If you're looking for unusual, Dashiell is it! Other options: Adriel, Uriel, Dane, Niall

--
What do you think of my choices? Would you choose different alternative names for any of these?
Written by The Art of Naming at 6:30 AM

You're very welcome! Thank you!