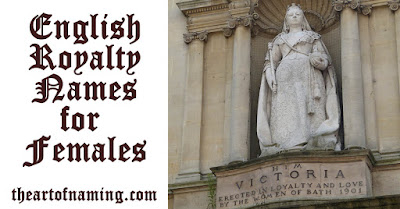 Princess Charlotte of Cambridge's first birthday is today, May 2, 2016. To celebrate, let's take a look at the names of female rulers of England and other Royal Princesses.

While there have been many rulers of England in history, the vast majority of them have been male. However, some of the most influential rulers were the Queens, especially Queen Victoria and our current, long-reigning Queen Elizabeth II.

Last week we took a look at the names of male rulers and their meanings and popularity over time. Now it is time to look at the women.

Names of Queens of England:


Mary comes from the Greek Mariam and Maria which were derived from the Hebrew Miryam. It's no secret that Mary (and Maria and Marie, etc) is by far the #1 name for women around the world. It ranked at either #1 or #2 in the US from 1880-1965. It wasn't until 2009 that it dropped out of the Top 100. As of 2014, Mary ranked at #120. It has been so well used that its starting to be a bit less favorable but it will most likely always be in decent use.


Elizabeth comes from the Hebrew name Elisheva meaning "God is an oath" or "pledged to God". This name has been used well by Christians in Europe and in medieval England, especially after the reign of Queen Elizabeth I in the 16th century.  Elizabeth ranked in the Top 10 from 1880-1923, and again from the 1980s to now. The name has always been within the Top 30 though. It is also extremely popular as a middle name. In 2014, it ranked at #14.

1558-1603 Elizabeth I
1952- Elizabeth II (Queen of Great Britain and Northern Ireland, Head of the Commonwealth of Nations)


Anne is the French form of Anna which, along with Hannah, comes from the Hebrew name Channah meaning "grace".  Anne and Ann were introduced to England in the 13th century and was commonly used since then. Anne has always ranked within the Top 700, typically within the Top 200. As of 2014, it ranked at #553.


Victoria means "victory" in Latin, in line with the Roman goddess of victory. It is the feminine form of the male Victorius. Believe it or not, Victoria was a rare name until Queen Victoria came around in the 19th century. Victoria has always ranked within the Top 300. It ranked the best within the 1990s. As of 2014, it was #19.


Short-reigning female rulers who were snubbed of their right to rule:

Matilda comes from the Germanic name Mahthildis meaning "strength in battle", from the elements maht "might, strength" and hild "battle". This was the name of a woman who was very nearly a ruler of England. It has also been the name of some wives of kings. The name was popular in England after being introduced by the Normans. Matilda ranked well in the US around 1915. It ranked within the Top 1000 from 1880 to the early 1960s, fell off the chart, and is now back on it as of 2008. The name is slowly climbing the charts, ranking at #583 in 2014.

Jane is the female form of John which comes from Jehanne, Iohannes and ultimately the Hebrew name Yochanan meaning "YAHWEH is gracious".  Jane ranked in the Top 100 from 1911 to 1965. It has now dropped down to #322 in 2014.

Other Royal Names for Females:


The following list is compiled from the firsts and middle names of Royal Princesses by blood, as well as some of the names of the wives of kings.  I recommend that you take a look at this page that lists out the first/middle name combinations. These are so beautiful and worth a browse.


There are probably some names that were missed or deemed a bit too unusual to include. Of the names above that made the list, which do you like most?  What would you name a future sister to George and Charlotte of Cambridge?
Written by The Art of Naming at 6:00 AM