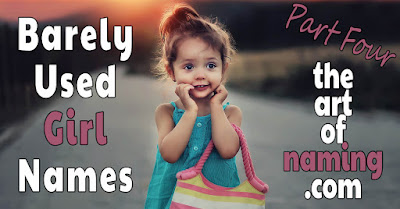 This is the fourth installment of our "barely used names for girls" series. I have compiled ten interesting names that do not receive enough births per year to rank within the US Top 1000 chart, as defined by the Social Security Administration. If you are looking for a name that you don't hear every day, this list could offer inspiration. (And don't forget to also check out the other three articles that came before this. There will be more to follow, as well.)

Which name on this list do you like the most? Which do you think could be the first to rank higher?

Winnie (211 births - #1189) -Winnie can easily stand on its own as a name, but it is sometimes considered a diminutive of Winifred. Winnie the Pooh was named after a real bear at the London Zoo named Winnipeg. Winnie was a hot name back in 1919, it's best year yet. It had 541 births for a rank of #275. It hasn't done that well since then, leaving the Top 1000 in the mid-1950s. However, it has done a little better in the past three years. Could it rejoin the top soon?

Geneva (202 births - #1220) Geneva may be a short form of the name Genevieve which comes from Genovefa meaning "tribe woman". Geneva also has a connection to Juniper through the French name genièvre, a name for juniper, and the traditional gin drink jenever.  Geneva is also the name of a city in Switzerland. Geneva was most popular in 1924, but it left the Top 1000 by 1996. Could it make a comeback?

Coral (199 births - #1230) Coral is derived from the Greek word korallion and is also an English word referring to the marine invertebrates found in underwater reefs. As a name, Coral has been around on record since 1881 in the US. It has always almost ranked below the Top 1000, but compared to the past, it has had more births per year in the past 2 decades. Could it finally make a splash soon?

Yara (199 births - #1232) Yara seems to have multiple meanings and origins. Yarah in Arabic means "precious ruby"; in Greek, Yara means "the loved one"; in Brazil, Yara means "forest girl"; and in some Yoruba dialects, it means "intelligent". The male Hebrew name Ya'rah is a variant of Jarah meaning "honeycomb". So Yara's quite diverse. It has been given to girls as a given name since 1969 but it has never reached the Top 1000.

Anneliese (195 births - #1345) Anneliese is, of course, a combination of Anna and Liese. Anna comes from the Hebrew Channah meaning "grace", and Liese is a German and Dutch diminutive of Elizabeth which means "my God is an oath" from the Hebrew Elisheva. Anneliese has been used since 1926 in the US, and it ranked one time in 2005 at #914. Perhaps it could be given a second chance soon.

Eisley (194 births - #1351) Eisley is an interesting name. It seems to be purely inspired by pop culture. There is a town called Mos Eisley on the fictional planet Tatooine in the Star Wars universe. It was this town that inspired the name of an American Indie band called Eisley. The name might even translate to "ice island" in German and other similar languages. So if you're a Star Wars fan, this may be a less-obvious way to honor your fandom than using, say, Luke or Leia. Eisley popped up for girls in 2003 and has gained a lot of usage since then, despite still falling below the Top 1000.

Emerald (193 births - #1357) The emerald is a precious green stone, the birthstone for the month of May. Supposedly, the emerald is meant to impart love to whomever wears it. The word comes from the Greek smaragdos. As a name, Emerald was first used in 1904. It was very rare until it gained a bit of traction in the 1970s. It's best decade so far was the 1990s when it ranked at the bottom of the charts. It dipped back down in 2003 but it has the potential to be better-used in the future since other Em- names have been so hot.

Brisa (192 births - #1361)  Brisa is actually the Spanish word for "breeze" and was originally more of a nickname for the name Briseida. In 1999, Brisa popped up as the name of a character in the Mexican telenovela "Por Tu Amor".  The name Briseida is a Spanish form of Briseis which is a Greek name of unknown meaning, and also a figure in Greek mythology. Brisa has been used in the US since 1974, and it ranked within the Top 1000 from the year 2000 until 2012. Has it peaked or could it return?

Bellamy (183 births - #1398)  As a surname, Bellamy is said to come from the Norman French words bel ami meaning "beautiful friend". There is a French novel published in 1885 called Bel Ami, which has inpsired many film adaptations over the years, including a recent one in 2012. Bellamy hit the popularity chart in 1993 and 1996, but it wasn't regularly used until 2003. It has been climbing upward and could make its debut in the Top 1000 in the coming years.

Yesenia (180 births - #1413) There is a tree from South America that belongs to the genus Jessenia. It is probable that the Spanish name Yesenia was derived from that. It was first used in a telenovela of the same name in 1970. The name was first used in the US in 1966 on record and it ranked in the Top 1000 from 1971 to 2012. It fell off the chart recently. Is it too soon for it to rise again?

The names on this list are all very different from one another. Are there any that caught your eye?
Written by The Art of Naming at 10:17 AM