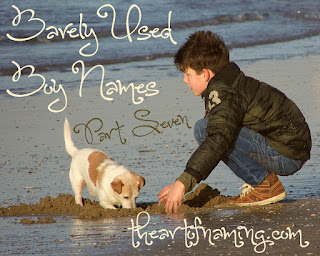 Ahhh! Part Seven! Here we are! The series just keeps chugging along with another 10 boy names to choose from! These barely-used names do not rank within 2015's Top 1000 chart.

Take a look at the names on this list, pick your favorite(s) and pair them with a great middle name in the comment section below!

Cordell (129 births - #1342) Cordell is an interesting surname name taken from Middle English usage referring to the maker or seller of cord. Cordell actually first appeared in 1903 for females, and 1904 for males. However, over the years, it gained more traction for boys, despite being given to a handful of girls here and there until 1937. For boys, Cordell has ranked on and off in the Top 1000, doing the best in the late 1990s.  Now it has fallen off the charts again but still earns a decent amount of births per year. Is this a name that you'd consider? Middle Name Ideas:  Cordell William, Cordell Elijah, Cordell Frost, Cordell Thomas, Cordell Ryan, Cordell Sebastian, Cordell Peregrine.

Jael (128 births - #1350)  Jael comes from the Hebrew name יָעֵל (Ya'el) which means "mountain goat". This was an Old Testament name used on a woman, the wife of Heber the Kenite. It's interesting that people have decided to use it for a boy. It was first used for girls back in 1957, and for boys in 1979. Over the years, it has actually been very evenly unisex with nearly the same amount of births for the year for each gender. In 2015, there were 150 girls named Jael and 128 boys. Middle Name Ideas: Jael Carter, Jael Matthew, Jael Benjamin, Jael Nathan, Jael Alexander, Jael Isaiah, Jael Tobias.

Creed (127 births - #1357)  Creed is an English word that refers to a set of religious beliefs, or any set of principals that must be followed.  It comes from the Latin credo meaning "I believe" or credere meaning "to believe". This name would most likely be used by parents who have strong spiritual beliefs, but it isn't off limits to those without faith. This has always been solely given to boys, dating back to 1880, but it wasn't regularly used yearly until the 1910s. It is more popular today than it has ever been, and yet it has not cracked into the Top 1000. Middle Name Ideas: Creed Jackson, Creed Oliver, Creed Michael, Creed Lucas, Creed Finnegan, Creed Anthony, Creed Gabriel.

Eleazar (127 births - #1359)  This comes from the Hebrew אֶלְעָזָר ('El'azar) which means "my God has helped" and was the name of one of the sons of Aaron in the Old Testament. Related names include Elazar, Lázár, Lazare, Lazzaro and Lázaro and of course, Lazarus.  Eleazar is a masculine name, (despite 7 female births appearing in 1993), and it has been in use in the US since 1919 on record. While it has never been popular or on the Top 1000 chart, it has had some solid usage over the years.  Could it ever catch on like other popular biblical names? Middle Name Ideas:  Eleazar Dean, Eleazar Lee, Eleazar Matteo, Eleazar Jude, Eleazar Beau, Eleazar Quinn

Tobin (127 births - #1362)  Tobin comes from an English surname that was derived from the male name Tobias. Tobias is the Greek form of Tobiah, a Hebrew form of Toviyyah meaning "YAHWEH is good". So, Tobin has been used in the US since 1941 for boys. It ranked as high as #720 in 1971, but fell out of the Top 1000 since then. Usage is on the rise now, but it hasn't quite caught on fully. Could Tobin gain enough popularity in the coming years to land on the Top 1000 chart? Middle Name Ideas: Tobin James, Tobin Andrew, Tobin Peter, Tobin Lysander, Tobin Clark, Tobin Leroy

Laith (126 births - #1369)  Laith is an interesting Arabic name meaning "lion". It is also sometimes used as a surname or romanized as Layth. This name dates way back to a notable Egyptian scholar who lived from 713-791. However, in the US, Laith has only been on record since 1969. It has slowly gained a handful more births year over year since then, but has never cracked the Top 1000. Laith has all the right sounds to potentially be popular, but will it ever get there? Middle Name Ideas: Laith Raphael, Laith Jasper, Laith Dominic, Laith Muhammad, Laith Cassim, Laith David

Zephyr (126 births - #1373) This is a fascinating Greek name from Zephyros meaning "the west wind" of which Zephyros was the god. Interestingly, Zephyr has a longer history as a female name. It was on record between 1905 and 1937 for females before going into name hibernation. It reappeared in 1975 for boys and 1981 for girls.  It was seldom used until most recently in the past decade.  Now it has far more usage on boys. It's rare that a name will turn from pink to blue in the US, but this one is trending that direction, even though it began as a male god name.  Middle Name Ideas: Zephyr Adrian, Zephyr Julian, Zephyr Noah, Zephyr Apollo, Zephyr Orion, Zephyr Leonidas, Zephyr Damian

Nestor (124 births - #1389) Nestor is a Greek name meaning "homecoming". There was a character in Homer's Iliad named Nestor who was known for his wisdom and longevity. The first usage of Nestor in the US was back in 1885. Always a masculine name, it failed to gain momentum until the 1910s, and it wasn't until the 1960s that it joined the Top 1000. It was most popular in 1991 at #587, but dipped back off the chart in 2008. Is this one too unusual for most people or could it gain popularity? Middle Name Ideas: Nestor Jack, Nestor Gabriel, Nestor Matthias, Nestor George, Nestor Timothy, Nestor Demetrius, Nestor Isaiah

Ollie (122 births - #1403) Ollie is a diminutive, or nickname, of the Oliver, Olivia and Olive branch of names. It is also used as a given name on its own. Ollie tends to be more commonly given to girls, especially back around the early 1900s. It ranked in the Top 1000 for girls until 1961. Ollie was used on boys simultaneously since 1880 but usually with fewer births per year. Only now is it trending upward for boys as a faster rate than for girls (122 male births vs 56 female in 2015). Will it break back into the Top 1000 soon? And if so, for which gender is it better suited?  Middle Name Ideas: Ollie Maxwell, Ollie Barnabas, Ollie Christopher, Ollie Marcus, Ollie Foster, Ollie Theodore, Ollie Laurence

Cillian (121 births - #1407) Finally, we have the Irish Cillian, pronounced kil-ee-an. This name was probably taken from the Gaelic ceall meaning "church" and combined with a diminutive suffix which likely makes it "little church". It was originally spelled Ó Cillín in Irish before being Anglicized into Killeen as well as Killian. It could also possibly be the diminutive of ceallach meaning "war, strife". There was a 7th century Irish saint by the name. Here in the US, Killian is more popular (#348 in 2015) because the spelling lends to the pronunciation. Cillian has only been in use since 1995 but it is climbing the charts. Middle Name Ideas: Cillian Ferdinand, Cillian Patrick, Cillian Fox, Cillian Henry, Cillian Archer, Cillian Pierce, Cillian Reid

What do you think of these ten names and what other middle names might pair well? Share your thoughts in the comments below!
Written by The Art of Naming at 3:30 AM