One of my favorite Greek names is Damian, which comes from the Greek name Δαμιανος (Damianos).  This name was listed on the Great Greek Names for Modern Boys list posted earlier this week. 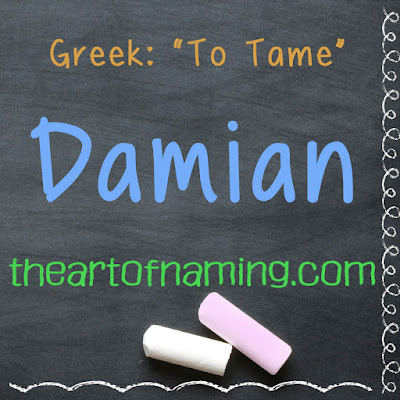 Damian is ultimately derived from the  Greek δαμαζω (damazo) meaning "to tame".  There was a saint by this name from the 4th century who was martyred with his twin brother Cosmo in Syria. There was also an 11th-century saint named Peter Damian who was a cardinal and theologian from Italy.

There's also a few spelling variations associated with different languages and cultures. The French Damien is also doing well in the US at #254 in 2015. Other spellings include Damon (#427), Damion, Damiaan, Damiano, Damianus, Damyan, Damijan and Damjan.

If you are thinking about using this name, here are some middle name ideas and some sibling name ideas that work well with the name Damian:

What do you think of this name? Which middle names would you pair with it?
Written by The Art of Naming at 3:30 AM