Aria, Gale & Zephyr: These Windy, Airy Names Will Blow You Away! 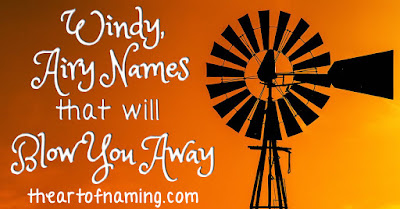 At this point, The Art of Naming has covered Water Names, Rocky Names and Fire Names. Let's take a look at some names that are inspired by wind and air.

Airy names can be quite refreshing like a gentle breeze, or much more powerful and interesting like the strong winds of a tornado or hurricane. Most of the names on this list are uncommonly used for modern children today, except for Aria which is climbing the charts for girls.

Take a moment to browse through these names. Which are your favorites? Can you think of any others that could be added?

The name Anil is a masculine Sanskrit name meaning "air, wind". It has ranked in the US since 1959 but never received more than 45 births in a single year which happened in 1989. As of 2014, there were only 5 boys named Anil. Perhaps this decline in usage indicates that it is not currently fashionable within its culture. What do you think of it?

In Italian, this name literally means "air". Most will also know, though, that it refers to a song or a melody, both of which are sometimes listed as the name's meaning. An aria is an elaborate vocal solo in an opera.

Aura is an English word most typically defined as "the distinctive atmosphere or quality that seems to surround and be generated by a person, thing, or place," according to Google. But as a name, it is said to be derived from Greek via Latin with the meaning of "breeze", according to Behind the Name.

This is a rare name and has not ranked within the Top 1000 in this modern age of naming, but it has been used on record since way back in 1881 in the US. It technically ranked a few times in those early years but it hit #641 with only 16 births in 1888 which is very unlike today's popularity stats. Today, 85 births in the year 2014 gives Aura the popularity ranking of #2201.

This is a beautiful Welsh, Cornish and Breton word that means "(poetic) inspiration". You may be wondering where the "air" theme comes into play. Awen is a very flowy name. Awen is said to be a flowing spirit, and that spirit is the essence of life. The airy part, though, comes from the word itself. Its Indo-European root "-uel" means "to blow" and has the same root as the Welsh word awel which means "breeze".


This breezy, whimsical name is truly unique in the US since this name has never been given to at least 5 girls in a single year. It is, however, sometimes ascribed to poets and musicians.

A gale is defined as "a very strong wind". As a name, Gale can either be derived from the Middle English gaile which means "jovial" which is considered a masculine name. It could be a variant short form of Abigail, which would be feminine. The same applies to the spelling Gayle, but this name could be used for either gender.

For males, it peaked in 1947 with 377 births and a rank of #352. Currently, it's also fading away but there were 9 births in 2014. It goes without saying that this name isn't currently fashionable for either gender. Do you think it could come back in style?

We have all heard this Hawaiian name on its most famous bearer, actor Keanu Reeves. Since this is an unusual name, he will probably continue to be the biggest associaton with the name for some time. This name can actually be given to either males or females. It means "the cool breeze" from the Hawaiian ke, a definite article, and anu meaning "coolness".

Mr. Reeves may be the reason this name gained usage in the US. It wasn't given to children at all until 1990 for boys and 1991 for girls, right around the time the actor began becoming more well-known in Hollywood.  Usage ceased for girls in 2006, but it is still being used for a good amount of boys each year.

Nasim is a unisex Arabic name that means "breeze". It does have some spelling variations such as Naseem and Nassim in Arabic, Naseem in Urdu, and Nesim in Turkish. Pakistanis use this name.

Here in the US, both Nasim and Naseem were originally given more often to girls from the mid-1970s to the early 2000s, but usage has nearly stopped. For boys, Nasim and Naseem gained usage in the 1990s and managed to keep it consistently since then. There were 5 boys named Nasim (and 5 girls too) in 2014. There were 22 boys named Naseem (but zero girls) in the same year.  Which of these two spellings do you like more?

Shu might not be a name that is on the radar for American parents, but it is interesting to note. Shu is the name of an Egyptian god. He is known as a personification of air, or the "God of the wind and air." He is also associated with sun and light.  Shu means "emptiness" and "he who rises up" in Egyptian.

Interestingly, the name Shu does have a sprinkling of usage over the years for both genders.   On record, there's been a total of 12 females named Shu (births in 1978, 1983 and 2007). For boys, there has never been more than 8 births in a single year, starting on record in 1992 for a total of 52 recorded male births. There could be even more people named Shu out there but we will never know about them since the SSA doesn't record fewer than 5 births. If there were only 3, they wouldn't be on the list.  What do you think of Shu?

If you're looking for a ton of wide open air, where else would you look but up? The Earth's sky looks blue during the day because air scatters blue sunlight more than it scatters red.  While Skye and Sky aren't directly associated with wind, the sky is massive and full of air.

Originally in the US, Sky was given to males and Skye was given to females starting in the mid-1950s. Since 1970, both names now have moderate usage for both genders. As of 2014, Sky is ranked at #740 for girls and #1402 for boys.  Skye is the most popular spelling overall with a ranking of #368 for girls. For boys, Skye is down at #2258. These stats suggest that while it is a unisex name, it is more commonly given to females. Which spelling do you prefer and for which gender?

A storm is defined as "a violent disturbance of the atmosphere with strong winds and usually rain, thunder, lightning, or snow." We're all familiar with storms. We've surely all been caught in one before. Wind storms can vary depending on the wind speeds, but the faster they are, the more destructive. They could escalate into dust storms, blizzards, tornadoes or hurricanes.

The names Storm and Stormy have been used for both genders since the mid-1940s. The one with the most use is Stormy for a girl. As of 2014, Stormy was given to 104 girls and only 6 boys.  Storm was given to 58 girls and 61 boys. Stormie is also given to girls; there were 69 born in 2014.  Which spelling do you prefer? Which gender?

However, Windy is more of a nature name inspired by actual wind which is defined as "bulk movement of air".  Wendy is typically a shortened form of the Welsh name Gwendolen and other similar names.  So Windy and Wendy aren't actually related.  Which do you like more?

Zephyros was the Greek god of the west wind, so the name Zephyr also means "the west wind". This name is typically masculine since it is the name of a male god, but in the US, it was originally given to females way back starting in 1905 to 1937. Nobody received this name on record after that until it popped up for boys in 1975, and again for girls in 1981.  These days, there were 99 boys and 21 girls named Zephyr in 2014.

According to Wiki, "the practice of using names to identify tropical cyclones goes back many years, with systems named after places or things they hit before the formal start of naming. The system currently used provides positive identification of severe weather systems in a brief form, that is readily understood and recognized by the public."  The first person to begin naming storms was a meteorologist named Clement Wragge. He named systems between 1887 and 1907, but after that, the practice fell into disuse until World War II.

Today, tropical cyclones are named by one of eleven meteorological services. It is said that using names for storms helps eliminate confusion, especially if there are multiple storms in an area at at time. Significant storms will have their names retired and replaced by another. The lists start alphabetically and continue down the list depending on how many storms there are in a year. Here just two of the lists for 2016:


List of Atlantic tropical cyclone names 2016:
There are many more lists like these that you can browse through if you'd like! What do you think of all the above names? Are there any more air or wind related names that could be added?
Written by The Art of Naming at 6:30 AM