Our final featured name for this alphabetical name series is the female name Zoey. Did you get a chance to view the final list of The Very Best Z Names for Boys and Girls earlier this week? 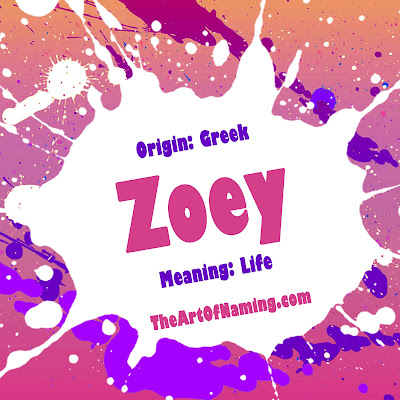 The name Zoey is actually a variant of Zoe. Interestingly, while Zoe has been in use in the US since before 1880, Zoey has only been around since 1967. Despite that, Zoey is the more popular spelling today. Both names are currently ranking within the Top 40 though.

After breaking down those American popularity statistics, which name do you prefer?

If you're not sure, let's take a closer look at the names. Zoe is a Greek name that means "life". According to Behind the Name, Zoe was historically considered a translation of the name Eve by Hellenized Jews.

There are two early Christian saints named Zoe, both were martyred in their day. In the Byzantine Empire, Zoe was actually a commonly used name for women including an empress in the 11th century.

There are plenty of variations of Zoe, including the one we are featuring today, Zoey. There's also Zoie and Zowie. The Dutch like the spelling Zoë, the French use Zoé, the Polish go with Zoja, while Russians and Ukrainians prefer Zoya.

Then of course there's the spelling Zooey which is popularized in Hollywood by actress/singer Zooey Deschanel. While she pronounces her name the same as Zoey or Zoe, the name Zooey is better known as a masculine nickname for Zachary or Zechariah. Author J.D. Salinger used the name Zooey for a male character in his book "Franny and Zooey". Deschanel was named after that character.

Believe it or not, the name Zoe has broad international appeal. In recent years, it has ranked within the Top 100 in at least 17 countries around the world including The Netherlands (#7), Hungary (#9), and France (#11). Click here to view a complete list of recent popularity rankings.

Are you considering using the name Zoe or Zoey? Here's some suggestions for middle names and sibling names:

Thanks for following this series for the past year! Tell me in the comments which name you prefer and what middle name you'd pair with it!
Written by The Art of Naming at 6:30 AM