To complete our week of analyzing German baby naming traditions and names, I present to you the lovely name Lorelei. 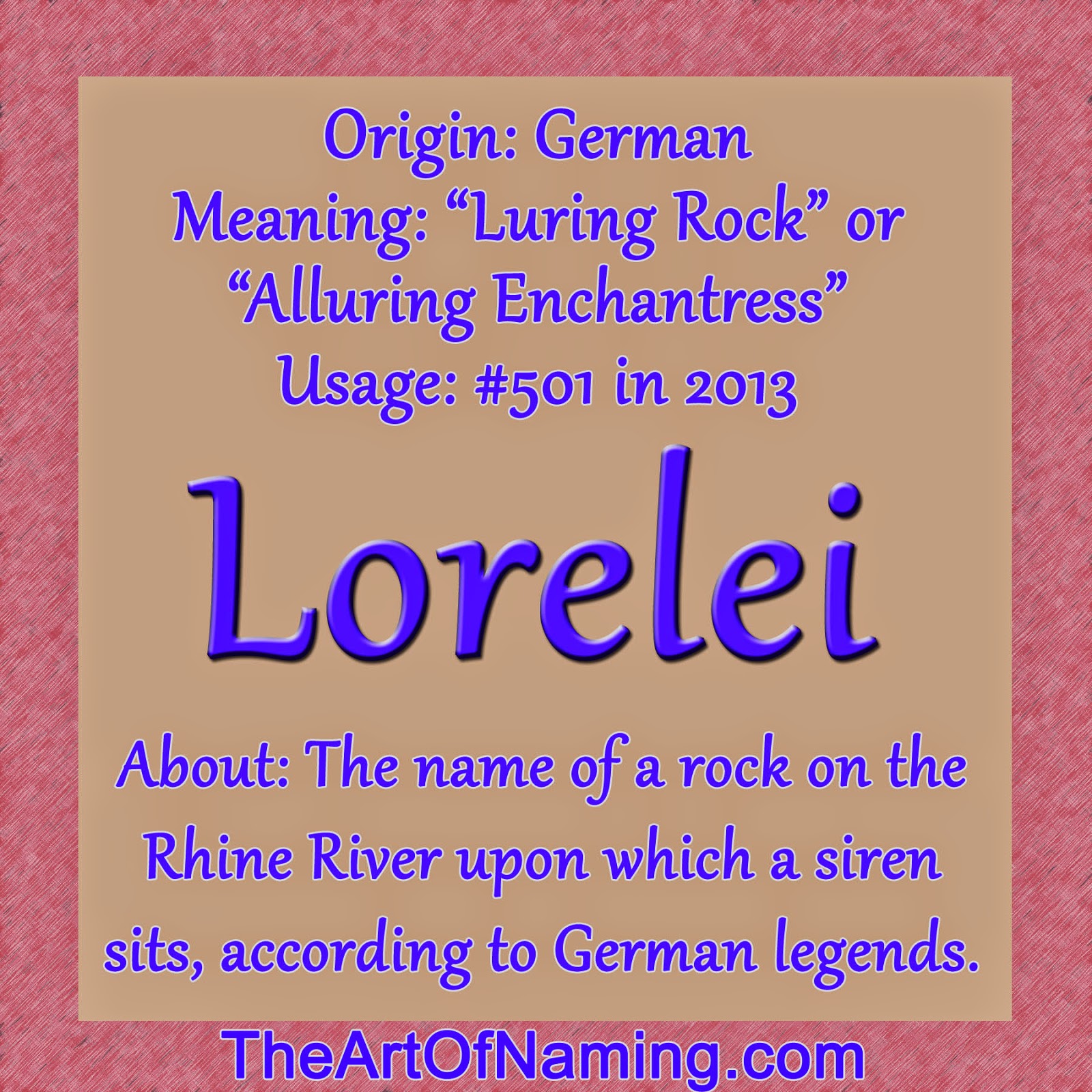 It actually comes from German mythology. According to legend, a beautiful seductress lived on a rock headland on the Rhine River. The rock itself is located near St. Goarshausen, Germany and is named the Lorelei even today. It is said that the maiden, or "water spirit", lures fishermen to their death with her haunting voice and beautiful song. For this reason, Lorelei means "luring rock" or "alluring temptress/enchantress".   It is sometimes spelled Loreley as well.

The image of this deadly siren has been a part of the name Lorelei for ages. Some may view that with a negative connotation, and others may enjoy the mythic beauty of a singing mermaid seductress despite the fact that she caused many deaths. It is just a legend, after all, so it is up to you whether the association is an issue or not.

Another strong association that has been around for a while is that of a gold digger in the film Gentlemen Prefer Blondes. She was portrayed by the late Marilyn Monroe.

However, the most recent association around today comes straight from pop-culture. In fact, many people will think of these two Loreleis first upon hearing the name. On the TV show The Gilmore Girls (2000-2007), a young mom named Lorelei decided that her daughter would be a junior and named her Lorelei as well, but she went by Rory. They spelled it Lorelai but pronounced it the same: LORE-uh-lie. Their middle names were Victoria and Leigh.

Other nicknames beyond Rory may include Lori, Lora, Lorel, Lore, and possibly even Lola, Lila or Lolly if you stretch it.

Interestingly, the spelling Lorelai, used in Gilmore Girls, was not used at all until 2001, coinciding with the show.  It has also climbed up the charts and had 336 births in 2013 for a ranking of #800.

Which spelling do you like better? Lorelei or Lorelai? Perhaps something else?  Here are some ideas for sibling and middle names if you're considering using this name for your child!

What do you think of the name Lorelei. Does the German myth bother you? What middle name might you pair with Lorelei? Leave your thoughts in the comment section below or on Facebook!
Written by The Art of Naming at 8:00 AM

I'd always liked Lorelei as I thought it sounded medieval and princessy, but really fell in love with it after Gilmore Girls - I love that show!

The legend reminds me a lot of the story of Circe, so I guess if you're happy to use one in theory you'd be OK with using the other.