Shall We Bring Back These Girl Names from the 1900s? 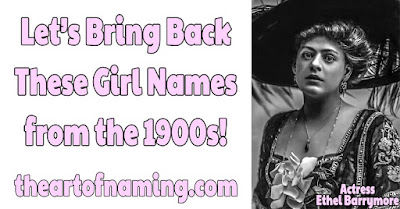 Welcome back to our "by decade" series that takes a hard look at the Top 200 combined names of a decade and compares it today's statistics. The Social Security Administration has an aspect of their site that combines the popularity of names between 1900-1909 and compiles it to make a Top 200 list. That's where I pulled this data. The rankings next to each name below is where that name ranked in the 1900s.

I pulled out some of the best names from then that do not currently rank within 2015's Top 1000 list. In fact, each of these names are far, far below the Top 1000 chart. They were once decently used but their time has since passed. Could they ever receive a second chance? Would you ever consider any of the following names for a modern daughter?

2. Gladys (#14)
This name has one of two possible origins. It either came from the old Welsh name Gwladus, which may have been derived from gwlad meaning "country". But Gladys has also been used as the Welsh form of the name Claudia, which comes from the Latin claudus meaning "lame, crippled". Not the greatest meaning, but Gladys has been popular in Wales in the past. Here in the US, it ranked very well around 1915-1925. It hit a high of 8,819 births in 1920 alone. It started its decline through the 1940s-1960s, finally leaving the Top 1000 by 1998. Only 83 girls were named Gladys in 2015. Could this name be fashionable again or is it still very much a grandma name?

3. Myrtle (#35)
Myrtle comes from the Greek μυρτος (myrtos) and is the name of an evergreen shrub. Nature and plant names are in style these days, but Myrtle has not been used much at all lately. It ranked consistently from 1880-1997 with a high point in 1918. Other than 6 births in 2005 and 9 in 2014, there were zero births on record after 1997. This name is currently not used, which is a shame. Myrtle would be very lovely on a modern girl. Will it ever come back?

4. Thelma (#41)
Thelma's meaning is not known but some have claimed that it is derived from the Greek θελημα (thelema) meaning "will", but it is not all that likely.  Thelma became popular at the end of the 19th century after British author Marie Corelli used it as the name of the heroine in her 1887 novel "Thelma". It peaked between 1915-1925 in the US but it started declining gradually after that. It left the Top 1000 in 1983 and now only has 27 births as of 2015. Has Thelma had its time? Could this name rise again?

6. Inez (#104)  Inez is a form of the Spanish Inés which comes from Agnes. Agnes is Latinized from the Greek names Hagne and hagnos meaning "chaste". Later the name was associated with the Latin agnus meaning "lamb". In use in the US since 1880 on record, Inez had the most births in a year in 1920 with 2,107 girls given the name.  It declined after that and left the Top 1000 altogether by the mid-1970s. Could Inez or Agnes reclaim a place on the charts in the near future?

7. Jean (#109) Jean is the Medieval English variant of Jehanne, from which Jane also derives. Ultimately, it is a feminine form of John which comes from the Greek Ioannes and the Greek Yochanan meaning "YAHWEH is gracious". Jane was common in England and Scotland in the Middle Ages before becoming rare up until the 19th century. Jean was in the Top 100 from 1907-1963. It saw the most births in 1927. It declined after that, leaving the Top 1000 in 1995. It may be used more often as a middle name these days.

8. Alberta (#116) Alberta is the feminine form of Albert which is derived from the Germanic name Adalbert from the elements adal meaning "noble" and beraht meaning "bright". Alberta was the name of one of Queen Victoria's daughters and it was for her that the Canadian province was named. While this name has always been used, it's become very rare. It fared the best in 1919 with 2,017 births for the year, but Alberta left the Top 1000 by 1971, dwindling down to a mere 9 births in 2015.

9. Goldie (#125) Goldie may simply come from a nickname for someone with golden hair but it is also a variant of the name Golda which means "gold" in Yiddish.  Goldie has been around since records started in 1880 in the US, briefly doing its best from 1915-1918. She was quick to decline in popularity, leaving the Top 1000 by 1959. There has been a slight uptick in girls named Goldie in the past couple years; there were 79 born in 2015. Will Goldie resurface?

10. Alta (#170) It is possible that the name Alta is derived from either the Latin altus or the Italian and Spanish word alto, all of which mean "high". Alto is a musical term that refers to the second highest part of a vocal range. Alta has been in use since 1880 in the US and hit a peak in 1918 with 820 births for the year. It dropped off the charts by 1957 and hasn't seen any increases since then. Should Alta get more love?

Would you ever consider any of these now-rare names? They all ranked well back in the 1900s but they are overlooked today. Which name deserves to come back the most?
Written by The Art of Naming at 6:00 AM