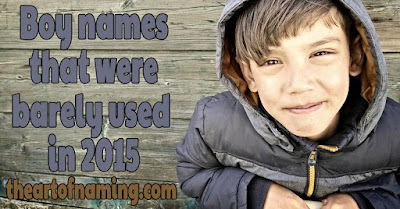 Are you looking for a name that is not currently popular, but also isn't strange? You've come to the right place! Today we explore part three of our series that uncovers names barely being used for boys today. This list breaks into the #1100s, which indicates these names are way down below the Top 1000 most popular names in the country for 2015.

Hollis (176 births - #1094) Since Hollis was derived from the Middle English word holis which refers to "holly trees", it was originally used as a surname by people who lived near such trees. Hollis had the most number of births in the year 1921 but left the Top 1000 in the 1970s. It is currently gaining a bit of popularity for both genders but it still ranks below the Top 1000 with 176 births for boys in 2015 and 106 for girls.

Cormac (175 births - #1099) This Irish name may have been derived from the Irish Gaelic word corb meaning "raven" and mac meaning "son". There was even a King of Ireland in the 3rd century named Cormac. The Scottish equivalent is Cormag. This name wasn't used in the US until the late 1950s. It wasn't until the 1980s that it gained consistent usage year-over-year. It is climbing the charts now but still remains below the Top 1000.

Dashiell (173 births - #1102) Dashiell's origins and meaning are relatively unknown. However, it is said to be an Anglicization of the French surname de Chiel. Dashiell popped up in the US in 1979 with 8 births on record. The name has never been in the Top 1000 but it is inching closer every year.

Shepherd (173 births - #1108) As indicted, Shepherd is an Anglo-Saxon occupational name that refers to a "sheep herdsman". This name has been used on and off in the US records since about 1912. It wasn't consistent year-over-year until 1994. Its usage has begun increasing recently but not enough to score a spot in the Top 1000...yet.

Mordechai (167 births - #1133) Mordechai is the Hebrew spelling of the Persian Mordecai which means "servant of Marduk". The spelling Mordecai was the first to be used in the US, popping up in 1912, whereas Mordechai wasn't used until 1950. By the 1970s, Mordechai quickly became the more popular spelling. It even made it into the Top 1000 twice, once in 2003 and again in 2012. Could it ever have a long-term spot?

Finnian (164 births - #1142) Finnian comes from finn meaning "white" in Old Irish. It was also the name of several Irish saints. The names Finn and Finnegan both rank in the Top 500, but their quirkier brother Finnian has yet to accomplish such feats. In the US, Finnian has only been used since 1993 on record. It is currently at a high point, but that still falls short of the charts. Could it be the next big thing?

Lathan (164 births - #1144) Lathan is an unusual one. There doesn't seem to be a concrete origin for it. Many sites list it as a rhyming variant of Nathan, or maybe a form of Latham which is even rarer. In the US, it has been used on and off since 1912. Only in the last decade has it gained a bit of usage, even ranking in the Top 1000 from 2010-2011. It is down a bit since then. Will it ever gain traction?

Kennedy (163 births - #1151) Kennedy is an Anglicization of an Irish surname. It comes from Ó Cinnéidigh which means "descendant of Cennétig". The name Cennétig means "armoured or misshapen head" and was the name of an Irish King. Kennedy is often given in honor of our late American President John F. Kennedy. It's also very popular for girls, ranking at #57 in 2015, even though it wasn't used for girls until the 1980s. For boys though, it was first used back in 1912, but it was never more popular than it was in 1964 when it ranked #516. It briefly ranked again from 1994-2005 at the bottom of the charts. Will this ever be popular for boys or is it too feminine now?

Linus (161 births - #1156) The name Linus comes from the Greek name linos meaning "flax". In the legends, he was the son of the god Apollo. Linus was also the name of the 2nd pope. In the US, it dates back to 1882 but wasn't used regularly until 1909. Interestingly, it was never popular in the past. It is receiving more births per year now than ever before. Could it catch on for the first time ever?

So which of these names do you like the most? Could you see any being catapulted to the top half of the charts in the near future? Or should these stay right where they are? Which would you use?

Thanks for reading!
Written by The Art of Naming at 6:30 AM