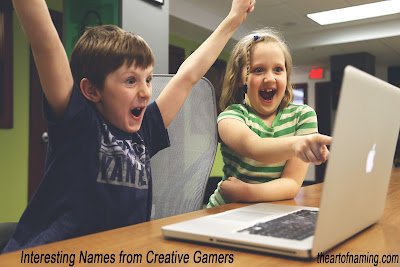 I occasionally play video games with my husband. We enjoy what's called "massively multiplayer online role-playing games" or MMORPGs. These games connect us with thousands of other players across the country (and sometimes around the world).

If you aren't familiar with these kinds of games, that's fine, it isn't super important for the point of this post. Basically, you create a character, design them from their hair and eyes to what sort of armor they wear. You choose what kind of class or profession you want them to have, even what race or species you prefer. Then the best part comes next: choosing an interesting name for them.

Some games will even offer guidelines that follow the lore behind the characters to help you decide on an appropriate name for them based on their story. Not everyone follows this, but I always do. Some people don't put any thought into it and come up with random words or phrases (like "Thats Odd") rather than an actual name. However, other times people put a lot of thought into it and come up with some very intriguing monikers.

I have to admit that I tend to get very distracted by the names, so much so that I started writing down some of the best ones that I've spotted. And of course, that means I must make a post about it and share them with you. Below is a list of names created by other people, real people, for their characters within one of the games I play.

Small disclaimer: these names are meant to be interesting. They are names of fictional video game characters. I am in no way suggesting usage on real life children; however there are some that are real names and could be used, like Lily or Phaedra or Audrey. Use your own discretion.

Do you play any games? What names have you chosen for your characters? Share your thoughts in the comments below! :)
Written by The Art of Naming at 3:30 AM