How Well Did My Sibsets Match from My "Statehood Initial Challenge" Series? [Part Two of Two] 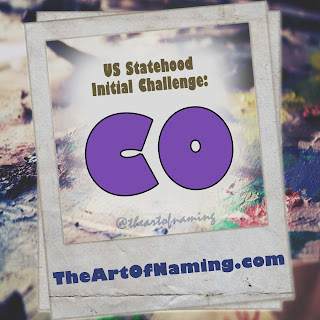 Finally, after three and a half years, the long-running Statehood Initial Challenge series has finished! In this series, I took the two-letter abbreviations of each state in the USA, and challenged you to use those two letters to name a boy and a girl. I played right along with you. After we covered 25 states, I listed all the sets of twins that I named throughout those two years of posts and found that I had repeated several of the names multiple times. I tried to avoid repeats for the 2nd half of the challenge, so let's see how I did.

I posted these states in the order in which they gained official statehood, which means Delaware was first, Pennsylvania came next, then New Jersey and so on until we finally reached the 50th state of Hawaii.  Here's the first 25, which I previously posted here:

The first half of the challenge was spread out over 2 years and I chose them spontaneously with each post. I didn't go back to see what other names I had used previously. I simply went with what I liked at the time. As a result, there were a few repeats.

This time around, I kept track of everything and triple-checked that I had not already used a name before choosing it. There should be zero repeats in the second half.  Let's take a look at the second half of the challenge:

Since certain letters were used more often, it became increasingly difficult to find names that I actually like. The letter N is not my favorite letter and it forced me to choose names that I wouldn't normally choose, like Norman, Ned, Nadine and Naomi.

The letter I was also challenging to find attractive options. While I did not repeat anything, I did end up with Ivy, Irving, Iverson and Ivander which all sound similar.  I did toss in an Yvander, but since the spelling is different, I didn't count it as being the exact same name as the previously used Ivander.

In the first half of the challenge, I noted that there were several unusual names like Hettienne, Gesine, Vadden, Averill, Cressida, Vella and Avara.  In the second half, I went with bold choices like Xanthippe, Apple, Wim, Willoughby, Nerissa, Caius, Darling, Winslet, November, Nyx, and Hermione.

But I also went for some old-fashioned names too. In the first half, we saw Irving, Gregor, Marlon, Mavis, Malcolm, Mabel, Lawrence, Ida and Laurel. In the final set of names, I opted for some Louis, Aloysius, Richard, Edmund, Edith, Mildred, Ward, Ulysses, Opal, and Ambrose.

Overall, this was a very fun challenge to continuously be apart of week after week. I can't believe it lasted three and a half years but here we are finally at the end of it! What do you think of my many choices? Do any of them stand out as absolute favorites? Are there any that you cannot stand? Share your thoughts in the comments and thanks for following!

Did you play along with this series? If not, we always have name games like this on our Instagram page!
Written by The Art of Naming at 3:30 AM