How Well Did My Sibsets Match from My "Statehood Initial Challenge" Series? [Part One] 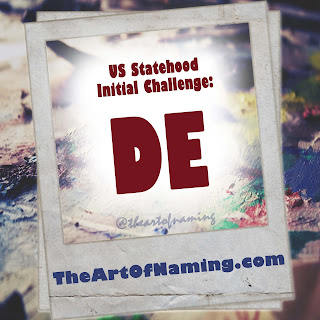 Way back in January 2015, I began a little series on Instagram that featured the two-letter abbreviations of states within the USA.

I started with Delaware, the very first state that was given official statehood, and then I continued on from there. This has been a very long and slow series, but finally, two years later, we've reached the halfway point.

With each post, I would ask you to name a boy and a girl using those initials as the basis. And each time, I would also post my name choices for those letters.

Let's take a look back and see how my impulse naming panned out. Over time, did I actually create a family tree of names that might match nicely? Or did those names vary greatly with each state? How many times might I have repeated a name? I'm willing to bet that my general naming style fluctuated greatly, but, if you've followed my blog since the beginning, perhaps you'd find me somewhat predictable.

What are your thoughts about my choices? Remember, these are spread out over 2 years and I chose them rather spontaneously with each post. I didn't go back to see what other names I had used previously. I simply went with what I liked at the time. As a result, there are a few repeats. 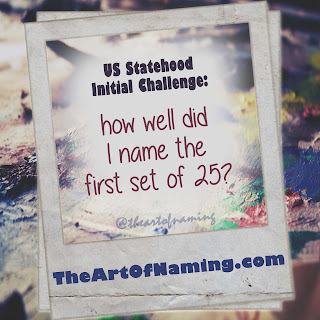 What these names show me is that some weeks I was feeling bold, so I would pick something more unusual like Hettienne, Gesine, Vadden, Averill, Cressida, Vella or Avara.

Other times, I was in a bit of an old-fashioned mood so I went for names like Irving, Gregor, Marlon, Mavis, Malcolm, Mabel, Lawrence, Ida and Laurel.

And sometimes I would play it safe and go for something common and classic, such as Oliver, Alexander, Thomas, Lily, Caroline, Abigail and Isabelle.

If I had to choose one name that does not belong here, it would be Kensington. It's much more trendy than the rest and isn't usually my kind of name. I might also toss Stetson in the same category.

Overall, if there weren't any repeats, I'd say this would be quite an interesting family tree to be part of. What do you think? Did I choose any that catch your eye? Are there any that just don't belong?

Whenever the statehood series is finally concluded, (even if its another two years from now), I will post that set of 25 twins and see how they match up. Hopefully I won't repeat any from here on out but I can't guarantee it! Stay tuned!
Written by The Art of Naming at 3:30 AM