What Should I Name Emma's Little Sister? 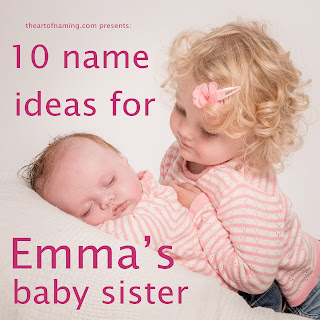 Emma was at the top of the pack in 2018. We will find out very soon if she's managed to hold on to her tiara, or if, perhaps Olivia, has dethroned her.  Emma has always been a popular name. Well, at least since Ross and Rachel chose it back in 2004. She was destined for greatness though, and has proved it over the past decade.

Emma comes from a Germanic element "ermen" which means "whole" or "universal", which helps give this name her appeal.  So much so that Emma isn't only a top name in the US, it has also received plenty of usage in Germany, France, Italy, Spain, Scandinavia and The Netherlands.

Is Emma the name for you? Popularity isn't always an issue for new parents. When a name is as beautiful and well-liked as Emma, parents will continue to use it! But the question then arises:

"What do you name a younger sibling for Emma?"

Surely, if you've fallen in love with the name Emma, you will want to find something just as lovely for her future sisters. This is where I come in. Below are 20 name suggestions that take different criteria into account.


Ava offers the same popularity as Emma, and both names are also palindromes. Both Emma and Ava are old-fashioned names that sprang to fame in the early 2000s.  Similarly, a third sister could be named Hannah (#33), another palindrome name, just in case you find yourself stuck in a pattern.  Ava and Emma are two peas in a pod!


Nora and Emma are both 4-letter names that offer a soft, sweetness. Nora is not as popular as Emma, but she can definitely keep up. Nora also has a strong history of usage behind her, dating back to the 1880s in the US. Today, Nora ranked at #30 and would be a lovely sister for Emma.


Stella + Emma = one sophisticated sister-set. These two names have a great balance together, perhaps it is that they both boast double-letters and an "a" ending, but they vary in sound. Stella is not as popular as Emma, but she does rank at #38 in 2018 and may continue rising in popularity. Stella was a hot choice back around 1920, just like Emma was. These sassy sisters make a great pair!


Adele has that similar sophistication vibe of Stella, these 3 together would make a terrific trio. Even more reason, both Emma and Adele have German, English and Italian usage, making both names have universal appeal in multiple cultures. What's nice about Emma and Adele together, is that they are comprised of differing but trendy sounds.  Both Em- and Ad- names are hot right now. Unlike Emma's popularity, though, Adele is less common, ranking at #898.


For some alliteration, Emma and Everly are a dynamic duo. Pairing these together gives them the similarity of the letter E, but they are different in style. Everly brings a more spunky vibe to Emma's girly sweetness, but both are very trendy and posh in their own right. Right now, Everly is a fast rising star, plucked from obscurity! She entered the Top 1000 as of 2012, and broke in to the Top 100 by 2017. I see her rivaling Emma for the throne in a couple years.


Sadie brings a variety in sounds, when compared to Emma. Some parents don't want names that are too similar, so the rest of the names on this list differ in sound. Style-wise, Emma and Sadie are both very sweet, old-fashioned names. I could picture them on modern-day sisters, and sisters from the 1920s. They have a charm about them as a sib-set, similar to the reason I chose Nora above. Sadie is not as popular, but still holds her own at #87.


To continue with names that differ in sound, Vivian seems like an obvious sister name to Emma. While Emma means "universal", Vivian means "life", so their meanings go hand-in-hand. They have the same old-fashioned vibe, but also could be the names of starlets on the red carpet. Vivian has been on the rise, currently ranking at #96.


While sister-name Sophia has been swapping popularity ranks with Emma for years, sweet Sophie has stayed more under the radar in the US, ranking at #98. However, in England, Sophie has been quite popular, ranking at #1 in 1996. I could definitely see Emma and Sophie as sisters walking the streets of London. These posh names deserve to be used together.


Emma could also go well with more modern names like Paisley (#52) or Kinsley (#63), or Riley (#28) too; similar to what I wrote about Everly, above. If you are leaning more toward this style now for your second daughter, it can definitely work. Emma and Paisley seem very sassy and cool together, especially if you want your girls to have their own style with very different sounding names.


To go even one step further, unisex choices like Harper, Piper, Avery or Quinn can provide a very interesting contrast to Emma. Emma tends to be considered more cute and girly, however, names like Harper can have a feminine charm of their own despite being considered more unisex. Emma and Harper work very well together even though they have very different sounds and styles.


Of course, these are just MY top 10 picks to pair with Emma. It's completely subjective. You may even disagree in your perception of some of these names, but that's the beauty of naming! There are no right or wrong answers. I just wanted to offer my thoughts on these names to give you some inspiration when choosing a name for Emma's little sister.   Which names would YOU pair with Emma?
Written by The Art of Naming at 3:30 AM