Inspired by our list of The Very Best N Names for Boys and Girls, I present the name Nova. 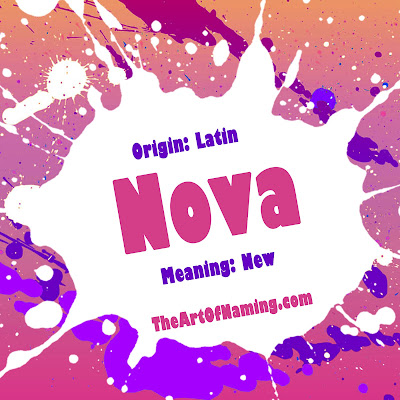 Nova comes from the Latin word novus which means "new". A nova is also a space term for when there is a cataclysmic nuclear explosion on a white dwarf planet. It causes a sudden brightening of the star. A nova is slightly different than a supernova which is a stellar explosion that briefly outshines an entire galaxy with as much energy as the sun before fading.

Nova is an interesting celestial name that's gaining more popularity today than ever before. It's short and sweet with a vivid letter V. It's quirky and cool for a modern girl. If you're considering using Nova, here are a few ideas for sibling names and middle names:


What middle names would you pair with Nova for a boy?
Written by The Art of Naming at 8:00 AM