The name Xanthe is brought to you today in honor of a previous article featuring The Very Best X Names for Boys and Girls. 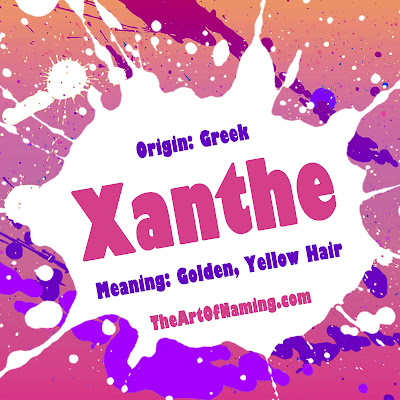 This name is Greek and is derived from ξανθος (xanthos) meaning "golden, yellow" or "fair hair".

While this is a very beautiful name, there can be some annoying pronunciation issues that go along with it. Fortunately, the overwhelming consensus that I've found among typical English speakers is that they pronounce it ZAN-thee. ZAN-tha is another possibility. Some claim that it is pronounced more like ZAN-they or KSAN-thee. If you'd like to read a discussion about it, click here.

For the purposes of this article, I will be assuming the pronunciation ZAN-thee.

Xanthe is a name used twice on the planet Mars. Once for the Xanthe Montes which is a mountain range, and once for a region referred to as Xanthe Terra. Additionally, there is an asteroid called 411 Xanthe. There were also a few minor mythological characters with this name.

Xanthe has only been in use in the US since 1964 however, it is far from common. It has never ranked anywhere close to the US Top 1000.

There have been many years that did not have at least 5 births on record for this name. There's also never been more than 12 females given the name Xanthe in a single year; this happened only once in 2001. As of 2014, there were only 5 girls given this name. It is very uncommon. Even rarer is the name Xanthia which has hardly had any use.

If you are looking for a big, bold, rare name for a girl, Xanthe is a great choice. The trendy X makes this name interesting while the rest of the name offers a unique sound. This name is sure to turn heads. If you're considering it, here are ideas for sibling and middle names: 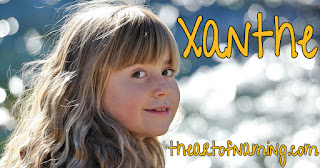 I played it a bit safe with these pairings since Xanthe is the bolder option. What would you pick as a middle name for Xanthe?
Written by The Art of Naming at 6:30 AM