Fruit and Spice and Everything Nice!: Food-Inspired Baby Names

When Gwyneth Paltrow named her baby girl Apple in 2004, many people had an opinion about it. To this day it is used as an example of "weird" and "awful" celebrity baby names.  But she isn't the only one who has used food names for their children. Just last year alone Hollywood has had at least 3 foody additions to the list: Drew Barrymore and Will Kopelman named their daughter Olive,  Barry Watson named a daughter Clover Clementyne, and Jason Bateman named his little girl Maple.

Why is it that Apple is mocked but Olive and Clementine and Maple are not? Is Apple really that strange? I think I was one of the minority that secretly thought Apple was freakin' adorable! And Gwyneth gets to say she is the apple of her eye. Win!

If you're among those who are fond of food names, here is a list of the most wearable options.  Which of these might you actually consider adding to your short list? Which do you think should never be used? 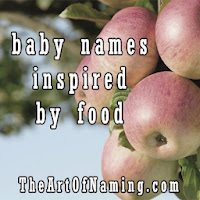 If you do have a craving for any of these names, what would you pair with it? Are you bold enough to use one of these in the first name spot or would you safely tuck it away in the middle?  Post your pairings in the comment section!
Written by The Art of Naming at 6:30 AM

A couple not on this list that I really like:
Raspberry
Blackberry
Spice (middle)
Pie (middle or nickname only)