The Girl's Name of the Week also comes from my Australian research. The name is currently ranked at #130 in Australia and gaining popularity! The lovely name is Freya. 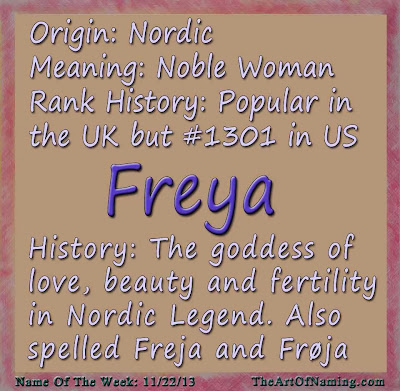 Freya is a Nordic name meaning "a noble woman". The Norse goddess of love, beauty and fertility was named Freya.  However, this is not the usual spelling in Sweden and Denmark. In those countries, it is spelled Freja and in Norway it is Frøja, but Freya is the common spelling of the goddess's name in English.

This moniker has been rather popular in the UK for quite a while! It ranks at #16 in Scotland, #19 in England and Wales, #53 in Northern Ireland and #61 in the Republic of Ireland. In Victoria, Australia, Freya is currently ranked at #130. 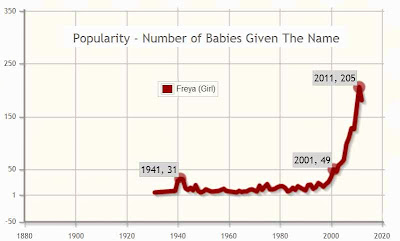 Clearly the States have not caught on to the beauty of this name like the UK and Australia have. While I would like to see it gain a bit more popularity, I do like to keep some names obscure as well. I feel like this name is in the sweet-spot between obscurity and familiarity.

What do you think of this lovely name and what would you pair with it? Let me know!
Written by The Art of Naming at 7:00 AM

Freya is so pretty! I think it has become better known here because of the actress Freya Stafford.

I think the middle name I have seen most often with it is Rose and the second one Elizabeth - it's probably just unusual enough that people don't want to add something too rare to it.

For some reason I rather fancy Freya Lark or Freya Snow - some sort of nature name.