This week's name theme is food-inspired. I have previously featured two of the names that are on the list: Basil and Clementine. I thought I would choose one that is less obviously food-related and more wearable as a name: Amandine. 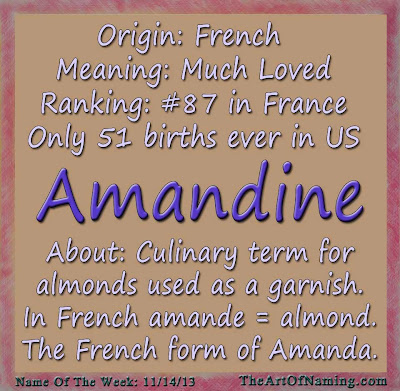 This lovely French diminutive means "much-loved" and is a wonderfully unique twist on the previously-popular and somewhat-dated name Amanda. On that note, it would also do well to honor a relative named Amanda but still give the child a modern and unique choice.

The French word for almond is amande. If you pronounce Amandine the way the French do, it would be a-mawn-DEEN. This name recently ranked at #87 in France and is occasionally used in Belgium. However, it is exceedingly rare in the US.

What middle name would you pair with Amandine? Do you have any more suggestions for a good sibling name? Let me know in the comment section!
Written by The Art of Naming at 8:00 AM

I think it works especially well as a middle name.