Name of the Day: Basil

Today's Name of the Day might raise your eyebrows at first. The Greek boy name Basil means "Regal" or "King" and is a quirky choice!

The most famous bearer of this name is Basil Rathbone who portrayed the very British Sherlock Holmes in 1939. And of course, many of you probably already thought of the basil herb. It is usually pronounced Baz-uhl rather than Bays-uhl like the herb. 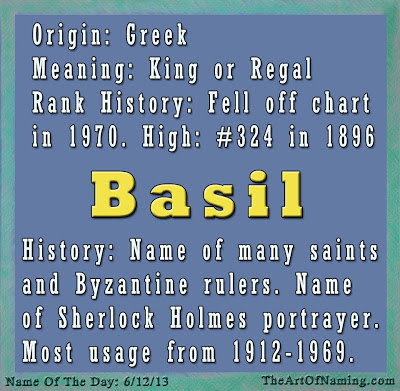 Let's try to see it from a different perspective than the above:

From the Greek name Βασιλειος (Basileios) which was derived from βασιλευς (basileus) meaning "king".  There were many Byzantine Empire rulers named Basil, as well as some Eastern Orthodox saints. Saint Basil the Great was a 4th century bishop who helped to found the early Christian church. Basil is rich in history. 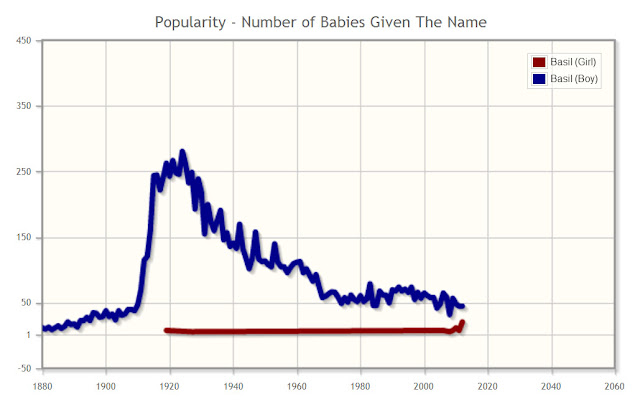 Today, Basil has been classified as a very fun name because of the manic Basil Fawlty from the British TV comedy classic "Fawlty Towers." There is also a Disney movie called "Basil of Baker Street" which stars "the Sherlock Holmes of the Mouse World."

If you still aren't sold, that's fine. I think this is an interesting name. It is on my guilty pleasures list so I can't blame any of you for not immediately using it for a son. However, there are other variations of the name that are interesting like the Russian Vassily or Vaska, the Ancient Greek Basilius, the French Basile, the Italian Basillo or the Polish Bazyli.

What do you think of Basil? Do you get the same unique and quirky, yet old-fashioned vibe that I get? Do you think it will ever be popular again, or is it too fusty?