Name of the Day: Asher

Today's Name of the Day is a soft, handsome boy name from the Old Testament: Asher. 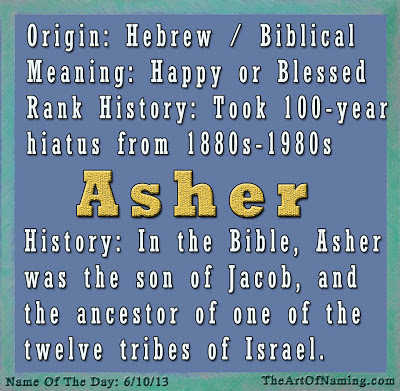 This name is a Biblical Hebrew name meaning "happy" or "blessed." Asher was the son of Jacob and Zilpah, (Leah's handmaid), and he was also the ancestor of one of the twelve tribes of Israel.

This name is definitely a favorite with today's parents! It has been climbing up the charts quickly! A very rare name at the end of the 19th century (only 42 boys received this name between 1880 and 1895.) It wasn't heard from again until 1910 and it remained rarely used.

What do you think of this handsome, biblical name? It falls into the new trend of giving boys "softer-sounding" names.  Asher is possibly the favorite of the bunch that contain the "sh" sound. And of course, the nickname Ash is appealing! Let me know your thoughts on this name!

As a Middle Name:
Nathan Asher
Daniel Asher
Brendan Asher
Michael Asher
Written by The Art of Naming at 11:47 AM