Boy Name of the Week: Edmund

The Boy Name of the Week is Edmund! It was recently featured on my list of old-fashioned, vintage boy names. Edmund is a cool and classic choice that would be handsome on a little guy today.

It is a sophisticated English name meaning "fortunate protector." I like the spelling Edmund more, but there is also the French form Edmond. I do like the Irish variation Eamon as well. 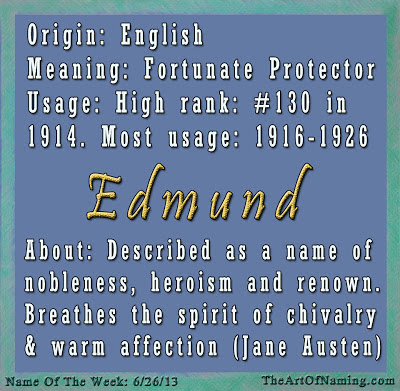 Not very many names have a popular, historical quote written about them, but Edmund does. In Jane Austen's book "Mansfield Park," the character Fanny says "There is nobleness in the name of Edmund. It is a name of heroism and renown; of kings, princes, and knights; and seems to breathe the spirit of chivalry and warm affections."  And the poet John Keats once said, "Had my name been Edmund, I would have been more fortunate." I would say that is a mighty fine testament to the name!

If you're considering naming your little prince Edmund, you may want to know more about its statistics! As far as ranking goes, this name was ranked the highest in 1914 at #130 on the US Top 1000 chart. In that year, 792 babies were born with the name. However, there are several years that have more births but a lower ranking.

I like to gage popularity more by the number of births than the rank. From 1916 to 1926, Edmund was at its  peak! It averaged just over 1000 births each year.

Do you think this is a name that deserves to be revived or is it just too old-fashioned? With the recent popularity of similar-name Edward, I would like to see more little Eddies on the playground.  What do you think?