Name of the Day: Verity

In light of my most recent list of names, today's Name of the Day is a feminine virtue name: Verity.

This name is Latin meaning "truth." If you know some Latin-based languages, you would recognize the root of the word. Verdad in Spanish, Vrai or Vérité in French, Vero or Verità in Italian, etc, which are also sometimes used as names. Or you could always straight-up go with the name "True" if you wanted. However, of all these, I think Verity has the prettiest sound, especially if you live in an English-speaking country. (If you have Latin roots, by all means, use one of the options above.) 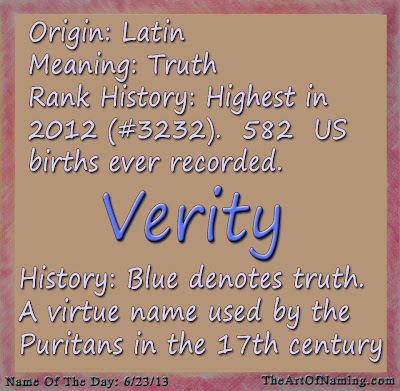 The name Verity is one of the virtue names that originated with the Puritans in the 17th century. They put such value and importance on the meaning of names that they began giving these virtue words as names. Other popular ones are Grace, Hope, Joy and Faith. However, I like to find the more unusual ones. While Verity currently ranks at #360 in England/Wales, it is rarely used these days in the US.

In 2012, there were 51 girls given the name Verity, which ranked the name at #3232 on the popularity charts. If you recall, the names aren't recorded unless there are at least 5 births per year. Therefore, the first recorded usage of the name Verity did not occur until 1966 when 6 baby girls were born. After that, it wasn't used again until 1973. From 1973 to 2006, the name was barely used, (an average of 10 babies per year.)

But then in 2007, popularity increased to 41 babies from 19 the year before. However, 2012 is indeed the year that has seen the most usage and it also has the highest ranking in modern history. (Makes you wonder how many Puritans were given this name back in the day, huh?)
If you're curious about the modern day usage, there have only been 582 baby girls ever named Verity in the recorded US history of names. If you use Verity, the chances of your daughter having a unique name are very good! Yet it is not hard to pronounce or unfamiliar! Score!

What do you think of this virtue name? Would you use it in the first name spot or the middle name spot?

The first Puritan baby to be named Verity in the United States was a boy!