Name of the Day: Desmond

Today's Name of the Day is Desmond, one of my favorite Irish names. 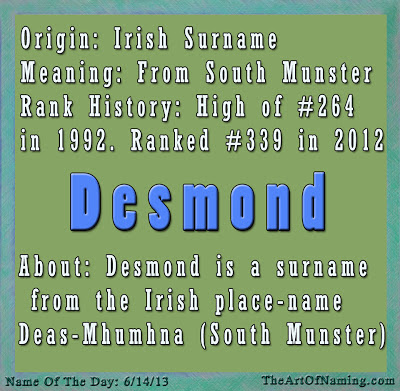 Yes, it is originally an Irish surname, but I can't help but love it for a boy's first name. It is bold but sophisticated. With the possible nicknames Des/Dez or Desi/Dezi, this name is starting to gain popularity in the US.

There have also been a handful of girls named Desmond almost every year since 1975. However, usage began slowing down in the 2000s, ending its female usage in 2007.

Desmond comes from an Irish surname which was derived from Deas-mhumhain meaning "South Munster", originally indicating a person who came from that region in Ireland. Therefore, Desmond means "one from South Munster."

My Favorite Desmond's are from Pop Culture:

While I personally love this name, what do you think of this name for a baby boy? Let me know in the comments below!