Today I want to take a closer name at a very rare and fantastical-esque name. I recently had the opportunity to recommend it to someone who had never heard of it before. They instantly fell in love with it and decided it might just be THE name they have been searching for. Perhaps you will enjoy it too! 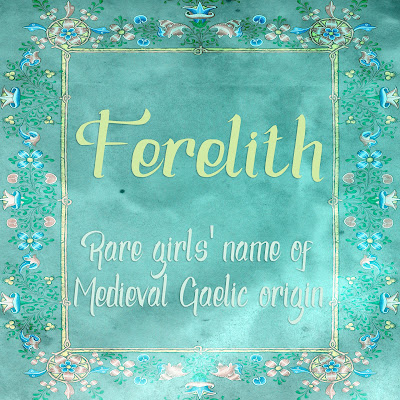 It is a rare feminine name of Scottish and English origin. It comes from the Medieval Gaelic name Forbflaith which means "overlord, ruler, or sovereign". There was an heiress in 13th-century Scotland who was named Ferelith. Aside from that, this name is very rare.

According to the US record, there has never been at least 5 babies given this name in a single year. That means that the chances of you running into someone with this name are slim to none.  If you are looking for a beautiful, rare name, this would make your child truly one-of-a-kind! With its Medieval origins, it has a Renaissance vibe, and also feels fantastical.

There are some other names that have a similar feel to them such as:  Aerith, Allifair, Caisséne and more.  If you're a fan of Ferelith, here are a variety of middle name ideas: