Name of the Day: Frederick

Today's blog post analyzed the name Elizabeth, so I thought I would go a bit more "classic" than usual with the "Name of the Day.'  I chose the handsome Frederick. 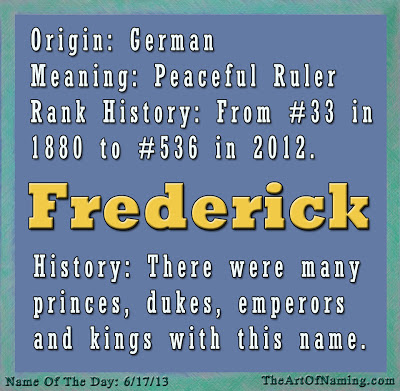 German meaning "peaceful ruler," Frederick is one of those old-fashioned, classic names that nearly disappeared for a while; (how many Freds do you know?)  Today, some parents are liking its solid history and classic charm and are reviving it!

Of course it hasn't really disappeared. Frederick has comfortably been hanging out in the 300-500 range of the US Top 1000 chart for the past couple decades! It was last in the top 100 in 1957.

Its largest popularity spikes occurred around 1914 and again around 1946. It was most popular in 1951 with a total of 4,982 baby boys born with the name Frederick.  It was even rarely but consistently used for girls between 1908 and 1993! Since the male popularity spikes, the name has fallen back down to respectable levels. In 2012, there were 482 babies born, which ranked Frederick at #536 on the US Top 1000 chart for boys. 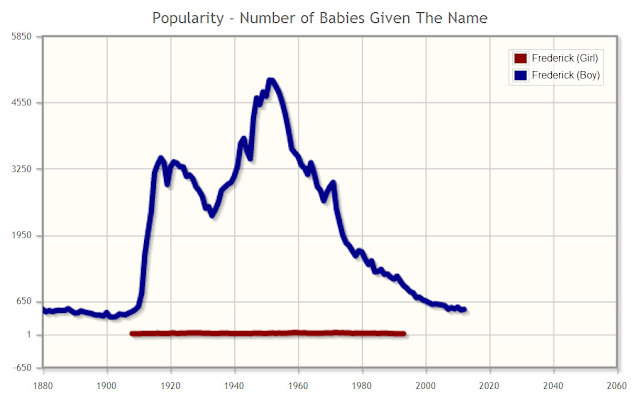 What sort of history does this name have? A very extensive one! I can't list everyone named Frederick. There are many ancient emperors and kings who held the name. Click here to view a wikipedia list of all the famous Fredericks.

The most notable Fredericks are Frederick the Great who was the King of Prussia (1712-1786), Frederick Douglass who was an escaped slave turned abolitionist (1818-1891),  and of course actor/singer Fred Astaire (born Frederick Austerlitz 1899-1987).

I had this article prepped up and then a while later I came across this article from Nameberry that was interesting. It interviews a man named Frederick and he gives his thoughts on his name and his nickname Fred.

What do you think of the name Frederick. Would you call him Freddie/Freddy or Fred?  Would you go with another nickname like Red, Fritz, or Rick? Or perhaps Derick/Erick which are derived from the spelling? Maybe good ol' Frederick is perfect is its entirety!   Let me know your thoughts below!