Name of the Day: Alexandrina

Today's featured name is 11-letters and 5-syllables long. Perhaps that explains why it is rarely used in the US.  Did you know that Alexandrina was the real first name of Queen Victoria who went by her middle name? 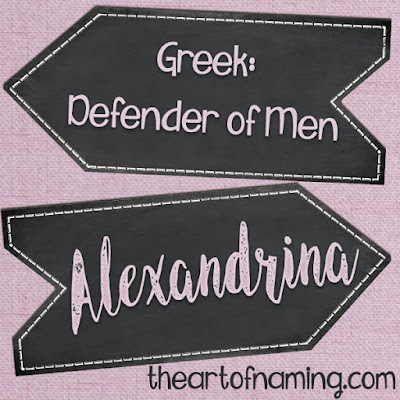 While many parents would opt for Alexa or Alexandra, there is something special about Alexandrina. It has a more exotic flair than her sister-names, and would be a beautiful middle name to pair with a short first name. Ivy Alexandrina or Claire Alexandrina are lovely. As a first name, Alexandrina Eve.

As a plus, it is truly a rare name today, but it is so familiar to the ears because of all the other Alex names.

That is far from being the #1 name in the country, but many could be drawn to it because of that. According to records, only 246 girls have ever been named Alexandrina. Talk about rare! In fact, the name wasn't used by at least 5 girls for the year from 2014-2016, meaning that it did not rank during that time. Do you know anyone with this name?

Alexandrina is a distinctive choice! It is the Greek variation of Alexandra and also means "Defending Men."  Because of its royal namesake, some people have been speculating it as an option if Prince William and Kate Middleton have a girl. It is also a great alternative to the more common royal names that get used today.

What do you think of this long, beautiful name? Are 5 syllables just too much or would you consider it?