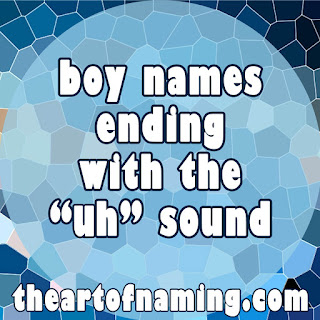 In recent years, the majority of masculine names have ended in the letter N. The second runner up to that is the letter R. These endings, while also used for females, tend to denote a strong, masculine name.

However, there is a whole other breed of masculine names that happen to end with what some may consider the "most feminine sound." The names we're looking at today are mostly biblical and end in either -a or -ah. There are a few notable exceptions such as Dakota, Indiana and Ventura that aren't based on a biblical name but still work very well for boys.

Interestingly, though, it is this "uh" sound at the end that gives these biblical names their strength. More and more parents today are using these names. For example, our #1 boy name for the past two years is Noah which is leading the pack and paving the way for other "ah" names to rise to fame.

Take a moment to explore these masculine "uh-ending" names:

Which are your favorites? Are there any I missed?
Written by The Art of Naming at 8:00 AM