After looking at all of the 4+ syllable boy names available, I wanted to pick one that was legitimately 4 syllables on its own as opposed to a name that earned 4 syllables by adding an -o to the end of a name that is usually 3-syllables. With this criteria, it was actually rather tough to find a good one that hasn't already been featured. I settled on the biblical Jeremiah. 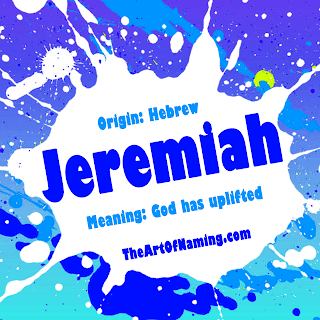 Jeremiah comes from the Hebrew name יִרְמְיָהוּ (Yirmiyahu) meaning "Yahweh has uplifted". In the bible, he was one of the major prophets in the Old Testament who wrote the Book of Jeremiah as well as the Book of Lamentations. He lived in the 6th century BC during the time of the Babylonian destruction of Jerusalem.

In England, the Protestant Reformation brought about the usage of a lot of names that were later carried to Colonial America with the pilgrims. Jeremiah was one of those names. However, the shorter variation Jeremy was sometimes used since the 13th century in England.

Jeremiah had a small peak of popularity in the late 70s during Jeremy's heyday but it is currently seeing its highest numbers ever, even though it has been in solid usage since 1880.  Possible nicknames could include Jere/Jer, Jerry, Jem, Jeremy, Miah.

What do you think of Jeremiah? Or would you prefer Jeremy? If you're in the market for some sibling or middle name ideas, here's some I came up with:

What middle names would you pair with Jeremiah? Share your thoughts in the comments below!
at 8:00 AM

hey! i'm searching for a short and sweet Boy Name! Who can help?

Hi Michele! Try this page: http://www.theartofnaming.com/p/boy-names.html
There are links to 3 letter boy names, 4 letter boy names, 1-syllable boy names and more. You could always ask a question on our social media or via the last two tabs at the top of the website.

Disclaimer: The links on this page contain affiliate links and I will receive a small commission if you make a purchase after clicking on my link.

All Content is Opinion of Kara Cavazos, Owner. Copyrighted by The Art Of Naming. 2020. Simple theme. Powered by Blogger.