While everyone will have differing opinions about which are The Very Best J Names for Boys and Girls, I'm sure many can agree that Juno is an interesting and unique choice! 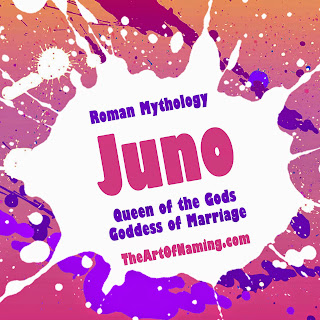 The feminine name Juno is very mythological. The ancient Roman goddess was a daughter of Saturn, the wife (and sister!) of the Jupiter and the mother of Mars and Vulcan. She was the goddess of marriage and childbirth and often looked after the women of Rome. Juno was also the Queen of the Gods, known as "Regina" which means Queen. Her Greek equivalent is the goddess Hera.

The meaning of the name Juno is generally thought to be unknown but some speculate that it is related to an Indo-European root word that means "youth".  Juno is a variation of the Roman name Iuno. Other related names are Iunius, Junius, Iunia, and Junia.

It has continued to slowly inch up the charts after that with a peak of 61 births in 2011. As of 2014, though, the name Juno has declined a bit to only 49 births for the year.

Interestingly, this name is also being used for boys despite the strong association with the goddess. It actually had more births in 2007 for a boy than for a girl but it didn't get a usage boost after that. It wasn't given to boys at all in 2010 but the year 2014 had 15 boys named Juno.

While I've seen this name get thrown around the baby naming community quite a bit, it has yet to catch on with mainstream America. However, that's probably a good thing because Juno can continue to remain a rare gem for the time being. If you are interested in using this unranked and unusual name, your child will be one of a kind in their school.

Here are some ideas for sibling names and middle names for Juno:

What do you think of Juno as a name? Would you use it for a boy? What middle name would you pair with it? Share your thoughts in the comments!

Photo credit: "Juno sospita pushkin" by shakko - Own work. Licensed under CC BY-SA 3.0 via Wikimedia Commons
Written by The Art of Naming at 8:00 AM