Today's featured name comes from the list of The Very Best K Names for Boys and Girls. This one actually happens to be unisex these days but it will be mainly presented for males in this article, (hence the blue below). 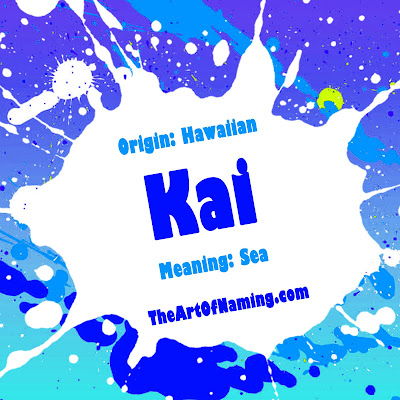 The Kai that I'm most familiar with is the Hawaiian name that means "sea". This is the one being featured here.  Other possible meanings for this name include "forgiveness" in Japanese, "food" in Maori and "willow tree" in Navajo.

Kai is also considered a diminutive for names like Gerhard, Nicolaas, Cornelis and Gaius/Caius. It is also a feminine variant of Kaja which comes from Katarina.

Internationally, Kai ranks well! It is actually doing better in other countries for boys than it is in the US. However, we're the only country that has a ranking for this name as a feminine one.

The name Kaia is a feminine form of Kai that's also ranking well at #551 in the US.

What do you think of the name Kai? It is short and sweet and definitely carries that Hawaiian vibe which gives the name warmth and an exotic feel. It is handsome and cool, bold but not unusual. Are you considering it?  If so, here are a few ideas for sibling names and middle names for Kai:

Unless you're Hawaiian, it is probably going to be difficult to find a middle name that will share Kai's origin. I wouldn't worry about that. The above names simply sound nice and flow well with Kai. What would you pair with Kai?
Written by The Art of Naming at 8:00 AM