As you may know, the Social Security Administration has released the list of 2016's most popular baby names. It covers the Top 1000 in the site, but more names beyond that are also available for download.

Emma has ranked at #1 four times now. The first time was in 2008, and now she's been ruling the chart for 3 years straight (2014-2016). Will Emma continue her reign again next year? If not, which name will steal the crown? I think Olivia will rise to the top in the next year or three. 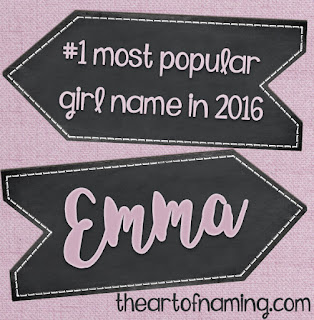 As for the boys, Noah replaced the long-running Jacob in 2013. This is Noah's 4th year in a row being #1. How much longer will it remain at the top? If it dips next year, which name would replace it? My bet is on Liam. 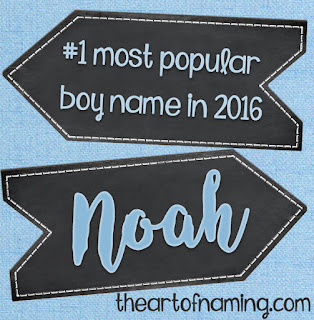 Names on the rise include:


One notable thing is that Elijah joined the Top 10 for the first time ever. Other names to watch include Oliver, Charlotte, Amelia and Evelyn.

Names on the decline include:

Every year, there are names that suddenly have major popularity boosts from one year to the next. These are fascinating to look at, but they don't always result in becoming "the next big name". However, if you want to avoid following the trends, it's good to know which names are being most-used by the masses. Here are the Top 10 names that climbed the most ranks:

And going the opposite direction, there are also names that lose favor in mass. Here are the Top 10 names that declined the most from 2015 to 2016:

Clearly America has grown tired of the Caitlin/Katelynn crowd. What do you think of those?

What other interesting stats did you see? Share any information that stood out to you the most!