We took a look at all the names ending with the letters -my in the previous post. Today we'll pull one of those from the list and get to know it better. I chose Jeremy,  which may feel a bit dated to many of you but it still deserves usage today. 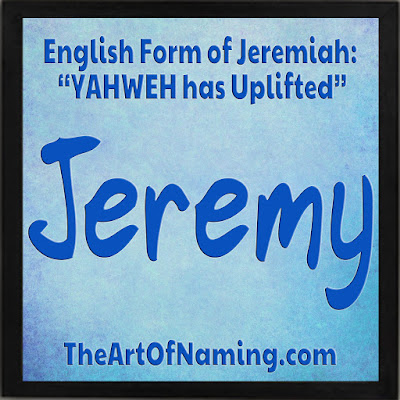 Jeremy comes from the name Jeremiah, it is the Medieval English version of it. Jeremiah comes from the Hebrew name יִרְמְיָהוּ (Yirmiyahu) meaning "YAHWEH has uplifted". Jeremy was occasionally the form used in England in place of Jeremiah since the 13th century. It wasn't until the Protestant Reformation that Jeremiah gained more common usage.

Interesting related diminutives include Jez, Jezza, Jem, Jemmy, Jere and Jerry.  Other languages and cultures offer interesting choices such as the Finnish Jorma, Jarkko, and Jarmo; or the Biblical Greek Ieremias, the Biblical Hebrew Yirmiyahu, and the Biblical Latin Hieremias.  The French favor Jérémie and the Spanish use Jeremías.

Jeremy itself works internationally without being "translated". It has ranked at #445 in France recently, #390 in the Netherlands, and #497 in England and Wales. Canada, Australia, Belgium and Switzerland also have the occasional love for Jeremy.

Today, it is still finding itself ranked at a respectable #174 as of 2015, which means 2,380 boys were named Jeremy in that year. It is a solid, "alternative classic" name. It is biblical-based and very versatile over multiple languages which means Jeremy will always be around, even though it isn't as popular as it once was.

What do you think of this name? Do you know any children named Jeremy? If you're considering it, here are some sibling name ideas and middle name ideas:

Which  names would you pair with Jeremy? Share your thoughts below!
Written by The Art of Naming at 3:30 AM