Fletcher is originally a surname that refers to a person who fletches arrows as their occupation. It is a Middle English name meaning "arrow maker" which comes from the Old French flechier. It is a surname but it has a tough, masculine feel to it with a bit of unique quirkiness added in. 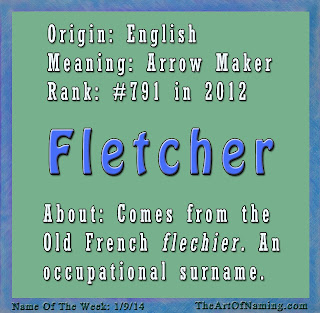 Following this week's post about names inspired by poetry, there was a poet named Thomas Fletcher (1666-1713) who was also a priest of the Church of England.  John Fletcher was a Jacobean playwright (1579-1625) who took over Shakespeare's role as the house playwright for the King's Men. Click here to view many more famous namesakes including several fictional characters named Fletcher.

love this name...but its also the name of a major road in the area lol so it all i associate with it now