The girl name Cordelia is a lovely, elegant and unique option! With nickname possibilities like Cora, Della and Lia, it is both cute for a baby and beautiful for a woman. 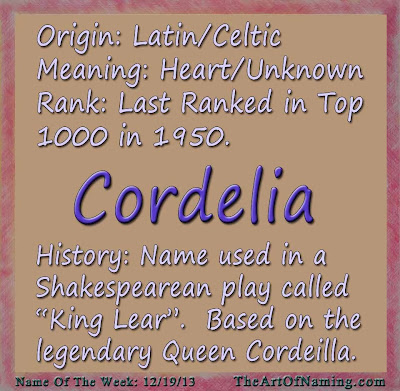 The name Cordelia comes from Cordeilla which is a Celtic name with unknown meaning. However, the name is often associated with the Latin word cor or cordis which means "heart". Some sites also say that it means "Daughter of the Sea". So I suppose you can take your pick of meanings!

Based on the legendary Queen Cordeilla, she was a character in Shakespeare's play King Lear written in 1606. He altered the spelling from the original Cordeilla to the modern Cordelia. In the play, she was the youngest of King Lear's three daughters and the only one that remained loyal to him.

Another literary reference to the name comes from the heroine of Anne of Green Gables who said "I would love to be called Cordelia. It's such a perfectly elegant name."

So while this name is familiar, it is still in unranked territory which makes it delightfully underused. Your child would be unique among her peers but also have plenty of history behind her name. I would call this name adorably elegant.

As a Middle Name:
Alice Cordelia
Mabel Cordelia
Phoebe Cordelia
Scarlett Cordelia
Zoey Cordelia
Written by The Art of Naming at 6:30 AM